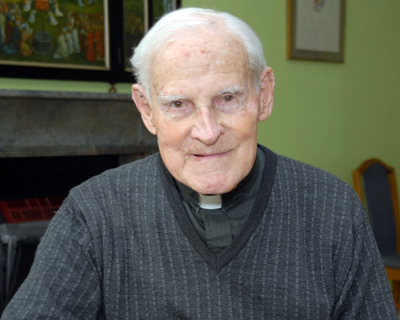 Fr. John Fitzgerald, SJ died on 13th January 2012 in Cherryfield Nursing Home, Ranelagh after a long illness which he bore graciously to the end. He was buried in Glasnevin cemetry following the funeral mass in Milltown Park Chapel on Monday 16th January.

Below is an interview with Fr. Fitzgerald before his death in which he recounts his experience of Zambia as a Jesuit Missionary.

Ã¢â‚¬ËœZambia was a completely new world,’ began Fr. John Fitzgerald, as he recalled his years spent in Africa.  It is certainly easy to imagine that the Northern Rhodesian bush, as it then was, would have been a world away from Fr. Fitzgerald’s native Killiney!

Fr. Fitzgerald was born in 1919, and was educated at Clongowes Wood College before joining the Jesuits in 1937.  He was ordained with his brother Teddy in 1950.  He spent 48 years of his life abroad, living and working in Zambia, Australia, Papua New Guinea, and Seychelles, before returning to Ireland in 2001.  Although it was only one of many posts, it was Africa on which his mind used to dwell.

Fr. Fitzgerald was sent to the Jesuit mission station in Chikuni, Zambia in 1953, where he worked at St. Canisius College, the Jesuit-run secondary school, and Charles Lwanga Teachers’ College, a centre for trainee teachers.  Although he did not view himself as a natural teacher, witnessing the benefits of education proved to be his greatest consolation in mission.  Seeing students on the path to better career prospects and a higher salary was gratifying because of the appreciation displayed by the students.  In his own words, Ã¢â‚¬Ëœyou didn’t give them very much, but they’d gobble it up.  They were good, eager students- even though I wasn’t a good teacher!’

Listening to Fr. Fitzgerald, one couldn’t help but conjure up exoticised images of a world completely foreign to our own.  This was particularly true of his descriptions of the physical landscape, the seasons, and the flora and fauna.  Life was governed by the changing seasons rather than the ticking clock, and everything depended on the coming of the rains.  Although the landscape would remain dusty and barren during the dry season, Ã¢â‚¬Ëœin the rainy season, everything changed. You quickly had a carpeting of all kinds of wild flowers, all totally different in appearance…  I was teaching in a rural area, and so much depended on the rain.’  With the rain, however, came danger: thunderstorms were frequent, and injury by lightning was not unheard of.  Other occupational hazards included venomous snakes and poisonous spiders, with the puff adder being the most dreaded.  If one stood on a puff adder, it could be fatal: because of the distance to the hospital, it was difficult to receive the necessary antidote.  For this reason, snakes were always quickly Ã¢â‚¬Ëœdispatched’, regardless of their species!

Climate and wildlife were not the only differences which Fr. Fitzgerald encountered.  He soon came to realise that Zambian Catholicism was expressed in ways which would be unfamiliar to Irish Catholics.  Ã¢â‚¬ËœThey threw themselves into Christianity wholeheartedly.  In comparison to what we are used to here, they are much more demonstrative in their piety: they sing, they dance, they participate.  Kneeling in silence, as we do, might be completely foreign to Tongan Christians.’  New and innovative ways of expressing Christian worship were devised to accommodate Zambian culture.  One such method involved using local hunting songs as templates from which to create Christian hymns: this allowed people to experience a message which was unfamiliar in a format which they recognised.  These hymns are still sung in Zambia today.

Missionaries in Africa have always worked as agents of development, and Fr. Fitzgerald believed that development is a key part of the missionary project: Ã¢â‚¬ËœChristianity cannot make any headway unless people also develop economically.  Without development, I don’t think Christianity could be easily accommodated.’  He stated that Dr. Corboy, who was appointed Bishop of Monze, Zambia, in 1962, was interested in developing Africa Ã¢â‚¬Ëœalong African lines’, so as to Ã¢â‚¬Ëœpromote the African.’  There was a great emphasis on promoting development in such a way that it fit with African culture.

However, some cultural practices were found to be difficult to integrate with Catholicism.  Fr. Fitzgerald argued that the Ã¢â‚¬Ëœsuperstitions’ of the Tonga had an occasional tendency to Ã¢â‚¬Ëœspill over into Christian living’.  This was particularly apparent with regards to local understandings of health and sickness.  Because the Tonga believed that all misfortune could be attributed to evil spirits, there was a constant struggle over their reactions to hospitals and Western medicine.  Certain practices which were antithetical to Christian living also proved difficult to stamp out.  For example, some converts would revert to polygamy because it was seen as an economic practice which was necessary for subsistence farming.

As an Irishman, Fr. Fitzgerald admitted that he originally found the cultural divide between Killiney and Chikuni quite difficult to bridge.  However, the influence and efforts of other Jesuits, some of whom produced cultural studies, English-Tongan dictionaries, and works of anthropology, made the transition more manageable for those who came later.  Ã¢â‚¬ËœIn our days it was a good deal different, but later works focused more on enculturation.’

Although the Chikuni mission is now run by Zambian locals, there is still a part for Irish Catholics to play in promoting the missionary spirit.  Fr. Fitzgerald believed that volunteering is a great help: Ã¢â‚¬Ëœthe fact that people are willing to go out and work must make a big impression [on their hosts].’   Such work benefits not only the recipients, but also the volunteers, by Ã¢â‚¬Ëœbreaking down barriers’ and facilitating the opening of a Ã¢â‚¬Ëœglobal conversation.’

Fr. Fitzgerald always remained optimistic about the future of the Jesuits in Africa.  Vocations have been successfully promoted, and studies for the religious life, from first interest up to ordination, are completed in Africa.  Returning missionaries are happy to pass the torch to their African brothers; this was, of course, always the end goal!  Ã¢â‚¬ËœIt’s a healthy looking, locally-grounded church.  The Jesuits will continue to do excellent work there, just as they do here in Ireland and in our other foreign Provinces.  All indications are that it will become stronger.’

Fr. Fitzgerald is missed by his family and friends along with members of the Jesuit community and staff at Cherryfield Nursing Home.

For more on John, watch the video below.