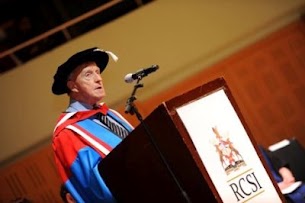 In accepting the honorary doctorate that RCSI has just now conferred on me I feel greatly honoured, greatly humbled and greatly privileged: honoured that RCSI should recognise in this way the limited contributions I have been able to make in advocating for more and better education for girls, a better deal for orphaned children and a more coherent response to HIV and AIDS; humbled that I should have been singled out from the great number of people world-wide who are dedicating themselves so wholeheartedly to efforts to stem the AIDS epidemic and who see girls’ education as central to this; and privileged that I can represent in some way so many thousands of wonderful people across the world whose lives have been darkened by the shadows of HIV or AIDS but who never lost heart.

Ladies and Gentlemen, forty-nine years ago the great Martin Luther King shared with the world his dream that, among other things, one day his four children would live in a nation where they would be judged not by the colour of their skin but by the content of their character.

Dr. King’s dream speech inspired his people and transformed the face of the United States to such an extent that less than four years ago the country elected its first ever black President, who could affirm: “Where we are met with cynicism and doubt, and those who tell us that we can’t, we will respond with that timeless creed that sums up the spirit of a people, Yes We Can!”

Ladies and Gentlemen, Graduating Students, our vision for global health is also a dream, a dream which strongly reaffirms that the enjoyment of good health is a fundamental human right and that in spite of the difficulties and frustrations of the moment the actualization of this right remains a possibility. In the words of Barack Obama, we here at this RCSI conferring ceremony can affirm with that timeless creed that sums up the spirit of this great institution – yes, we can.

Yes, we can eliminate infant and child mortality, and ensure universal vaccination coverage against measles, polio and other diseases.

Yes, we can roll back the malaria which affects over 200 million people each year.

Yes, we can reduce and eventually eliminate the almost nine million new cases of tuberculosis that occur each year.

Yes, we can even address the enormous challenges of neglected tropical diseases which currently affect more than 1,000 million people and thrive in the poorest, most marginalized communities.

Yes, we can ensure the access of all peoples – here and in all other parts of the world – to a level of health care that will help them lead a satisfying, full and productive human life.

Yes, we can do it and we are doing it.

Let me speak for a few moments about my own country, Zambia, where just three months ago a team of nine doctors successfully removed a fourteen-and-a-half kilo tumour from the back of a young man. Of course, the tumour should never have been allowed to grow to such size, but that it could be successfully removed speaks well for the medical services that a developing country can provide.

In recent years, Zambia has also seen considerable improvements in many of the markers for health care:

More widespread use of anti-malarial drugs, an increase in the numbers sleeping under anti-mosquito impregnated bed-nets, and more widespread spraying of mosquito breeding areas.

Believing, as RCSI does, that the person is at the centre of everything we do, we need a more enlightened priority system that ranks health, education, social services and job creation higher than bailing out questionable financial institutions, and certainly higher than squandering public resources on doomed investments and extravagant and even corrupt undertakings.

And that requires that every one of us here today pulls together to make this a better and more decent world. It requires that we become radically committed to eliminating scandalous inequalities in the access of people to health care. It means that we firmly believe that each one of us can make a difference for the better.

Distinguished Ladies and Gentlemen, Graduating Students, let this conferring day be memorable for the way it motivates each one of us to dream of something that never was – a peaceful, healthy and more just world – and ask “why not? Why can’t I do something to make it so? What am I doing to make this a better world? What more can I do to ensure peace and health and basic justice for all people?”