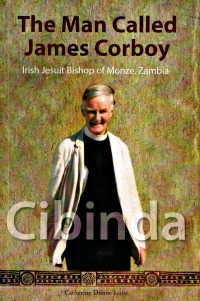 The life and work of James Corboy SJ, Bishop of Monze, Zambia, was celebrated with the launch of his biography by Sr Catherine Dunne, in the Arrupe Room, Milltown Park on Thursday 24 January.

It was a great occasion described by some there as a “reunion of the diocese of Monze”. Over fifty people attended the launch, including members of Bishop Corboy’s family, who had an opportunity to meet many of those who had known him in Zambia.

The Irish Jesuit Provincial, Tom Layden SJ, warmly welcomed the publication of Catherine Dunne’s book, ‘The Man Called James Corboy’, published by The Messenger Office and sponsored by the Irish Jesuit Missions. He recalled meeting Bishop Corboy, whilst studying for his Leaving Certificate at Clongowes, and he remembered how he spoke about the plight of farmers in Zambia with real concern.

The Provincial said reading the book he was struck by the impact Vatican II made on James Corboy and how its vision of the Church as the people of God was always to the fore in everything he did in the Monze diocese. It permeated his leadership style and his sense of purpose, he said.

He also referred to the fact that James was given the Tonga name of “Cibinda”, meaning a wholesome person who knows where he is going and where he is leading others. Listen here to his talk.

Two of James Corboy’s nieces, Joanne Sheehan and Ann Ryan, painted an intimate picture of their uncle, especially in his later years at Cherryfield, far removed from his beloved Zambia.

Ann recalled how she and he shared a great love of gardening, flowers and muck! She said he also took great interest in the progress of his great nephews and nieces. Indeed, his great-nephews, Josh and Alan, and his great-nieces, Anna and Alice, were all present and received copies of the book from Catherine Dunne.

Joanne Sheehan told of how there had been Jesuits in the Corboy family for nearly 200 years. She said her uncle “gave his whole life to other people and in that way he was a real Jesuit – a true man for others.” But he only ever claimed a tiny role for his work in Zambia acknowledging the tremendous group of Irish people who had made an enormous contribution to the country besides himself.

Damien Burke from Jesuit Archives provided a recording of Bishop Corboy’s own words from 1962 on the occasion of his consecration as Bishop, along with slides from his early life and time in Zambia. In the recording Bishop Corboy said that “Africa owes a tremendous debt to the Irish people” and thanked everyone for their continued prayers and financial support.

Sr Pius, an 89 year old missionary nun who worked with him in Monze, recalled his attempts to teach them about Vatican II on his return from Rome. “He said that the Council changed his life forever, and he talked about ‘communio’ so often. Something about him touched our hearts as he tried to teach us about the Second Vatican Council – even us ‘noodley’ heads were moved.” She said he valued people and valued particularly the wisdom of women. “We owe him a great debt.”

Sr Catherine Dunne also spoke and read an appreciation of the book from Sr Rosalio of the Holy Spirit Sisters, the order founded by the Bishop with the assistance of Catherine herself.

She said she was encouraged to know the book meant so much to people because, “many’s a time whilst writing it I heard his voice from behind me saying ‘have you nothing better to do with you time?’ I’m glad I didn’t heed that voice now”.

After the launch and a celebratory lunch, Sr Catherine spoke in depth to Pat Coyle of the Jesuit Communication Centre about ‘This Man Called James Corboy”: Listen here. See photos of the launch here.