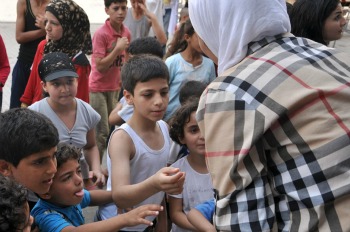 “What strikes me most about these refugees is their sadness at leaving a country which they love and where they have left many loved ones. Perhaps the bombardment crept just a bit too close for comfort or perhaps members of their community are being targeted for kidnappings.”

Fr. Gerard Clarke is an Irish Jesuit missioned as a member of a JRS rapid response team based at International Office in Rome. There are three team members: Francesca, the team leader is based in Rome, Ernesto is currently in West Africa and Gerry in the Middle East and North Africa Region. These are short deployments of about 6 months designed to help out JRS teams where they are facing specially difficult situations.

It is just six weeks since I started work in Beirut, Lebanon and these last few weeks have been spent planning for 2013 and the data is being gathered to make sure the plans match the needs and the needs find funding. As proposals from JRS teams arrive in our email inboxes the growing staff at our Regional Office burrow their heads in Excel files, comparing and cross-checking figures with ““outputs”, and matching ““outcomes” with ““indicators”: all the jargon of a humanitarian organisation scaling up its operations in the Middle East and North Africa Region. Based temporarily on the third floor of the Jesuit Residence in Beirut our team of three; a communications officer, finance officer and human resources officer are settling in for the long haul. And while we know that the frontline work is where the pastoral skills of JRS really count, it is also clear that our teams still need the back up of administrators at the Regional Office.

And the needs are not decreasing. In fact an alarming increase of refugees fleeing the conflict in Syria has been noticed in neighbouring countries Lebanon, Turkey and Jordan. The total number of Syrian refugees registered by the UN is 525, 465 and rising and the UN now estimates that 3 million Syrians are now ““food-insecure” people, all of which makes for a pretty grim prospect. For a given family it may begin with the loss of regular safe water supply or intolerable cuts in electricity; and this isn’t even to speak of the bombardment that switches unpredictably around the principal cities of Syria such as Aleppo, Homs and Damascus. The UN Office of the High Commissioner of Human Rights has stated that the overall death toll has reached more than 70,000 people since the onset of the crisis in March 2011. UNICEF has begun an operation to ship 1 million litres of chorine to provide safe water for more than 10 million people (half the total population of Syria!). And the Jesuits are also mobilised to help.

Our contribution has traditionally been in the field of education but this time JRS is focussing first of all on the distribution of ““Food baskets” and non-food items such as blankets, stoves, hygiene kits and other items that may be needed. Education will follow and a programme is in preparation for the children of remote towns where refugees are not being served by others agencies. The plan is to prepare Syrian refugee children for integration into the Lebanese system; and for that they need a knowledge of French, English and Maths. In Turkey and Jordan too JRS teams are scaling up their support of Syrian refugee families.

What strikes me most about these refugees is their sadness at leaving a country which they love and where they have left many loved ones. Perhaps the bombardment crept just a bit too close for comfort or perhaps members of their community are being targeted for kidnappings. A UNICEF report put it poignantly when quoting a refugee recently arrived: ““We came here but left our hearts in Syria with all our relatives and loved ones.” And while it may be absolutely imperative to get out, Syrians who have stayed are trying to pull a new society out of the ruins of their country. Our communications officer here in Beirut has produced a short video which has captured the hearts of thousands of people who have stayed behind and since its posting on Youtube has registered thousands of hits and plenty of moving comments. I like to think that while capturing hearts it also captures the spirit of the Jesuit Refugee Service.

Visit: http://www.youtube.com/watch?v=k__dYVnz9N0If you would like to make a donation or help in some other way, please check here.