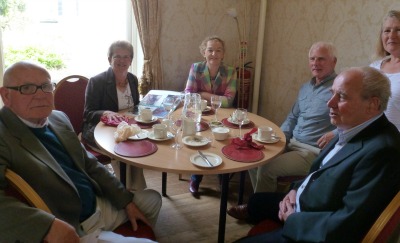 On Saturday morning 22 June a Mass took place in the Dromantine Retreat Centre, near Newry, Co Down.  This Mass was the second gathering in Northern Ireland since we celebrated Mass in Benburb last year. We met to celebrate the lives of Jesuit Missionaries from Northern Ireland and to thank their family and friends who have supported them and the Irish Jesuit Missions over the years.

Fr John Guiney SJ and Fr Martin Curry SJ officiated and started by asking everyone to introduce themselves. At the offertory, items from Africa and Asia were brought to the altar.  John and Martin spoke of the wonderful work which our missionaries had done over many years and the contribution they had made to the people they had served.  John also spoke of how grateful he was to the families of these men for their friendship and support. A lovely ceremony took place where friends and family lit candles and spoke briefly of someone they wanted to particularly remember.  After Mass everyone was invited for lunch and we caught up with old friends or met new ones.  We look forward to having this Mass as an annual event.