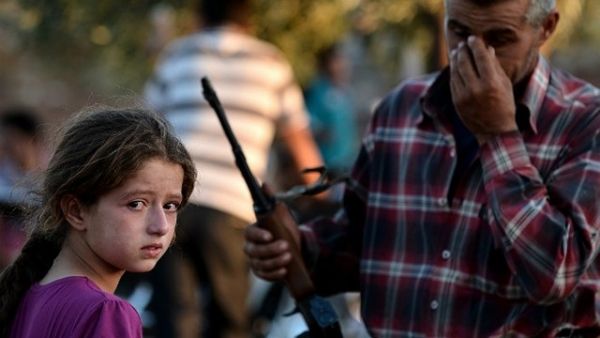 The UN refugee agency, in a report released on Friday, says staggering numbers of Syrian refugee children in Jordan and Lebanon are growing up in fractured families, missing out on education and serving as their household’s primary breadwinner.

“If we do not act quickly, a generation of innocents will become lasting casualties of an appalling war,” said UN High Commissioner for Refugees AntÃƒÂ³nio Guterres on the release of the report, which covers refugees in Lebanon and Jordan.

The report, “The Future of Syria – Refugee Children in Crisis,” details the fracturing of families, with more than 70,000 Syrian refugee families living without fathers, and over 3,700 refugee children unaccompanied or separated from both parents.

The 32-month conflict has left deep scars on defenceless children. In the first six months of this year, 741 Syrian refugee children were referred to hospitals in Lebanon and treated for injuries. More than 1,000 children in Jordan’s Za’atri Refugee Camp were treated for war-related injuries over a one-year period.

During focus group discussions with refugee boys, several expressed a desire to return to Syria to fight. The researchers also heard a report of boys being trained to fight in preparation for return to Syria.

Refugee families lacking financial resources send their children to work to assure their basic survival. In both Jordan and Lebanon, the researchers found children as young as seven working long hours for little pay, sometimes in dangerous or exploitative conditions. In Za’atri camp, most of the 680 small shops employ children. An assessment in 11 out of 12 governorates in Jordan found nearly one in two refugee households surveyed relied partly or entirely on the income generated by a child.

The UNHCR research details a painful life of isolation, exclusion and insecurity endured by many refugee children: 29 per cent of children interviewed said that they leave their home once a week or less. Home is often a crammed apartment, a makeshift shelter or a tent.

“The world must act to save a generation of traumatized, isolated and suffering Syrian children from catastrophe,” UNHCR Special Envoy Angelina Jolie said.

The study includes multiple testimonies from children. Nadia, a newly arrived refugee in Jordan said, “Our lives are destroyed. We are not being educated, and without education there is nothing. We’re heading towards destruction.”

The report details the effort mounted by the UN, non-governmental organizations, host governments and refugees to address the suffering faced by children. Financial assistance to refugee families is offered by UNHCR to help destitute and struggling families. The report profiles the creative efforts of UNHCR, UNICEF, Save the Children and other NGOs to give children a chance to resume their education. Generosity and kindness of host communities is a recurrent theme.

There are more than 1.1 million Syrian refugee children, the majority living in neighbouring countries. Demanding that “this shameful milestone of conflict must deliver more than headlines,” Guterres and Jolie called for support for Syria’s neighbours to keep their borders open, improve their services and support the host communities. They also appealed for countries beyond Syria’s borders to offer resettlement and humanitarian admission to people who continue to feel unsafe in exile and families with seriously injured children.

After nearly 1,000 days of conflict, the report is designed to refocus attention on the plight of Syrian refugee children. The findings are presented on a multimedia microsite (http://www.unhcr.org/FutureOfSyria) that features photographs, videos and easily tweetable quotes and statistics. Some of the videos were shot with GoPro cameras that followed children in Za’atri camp.