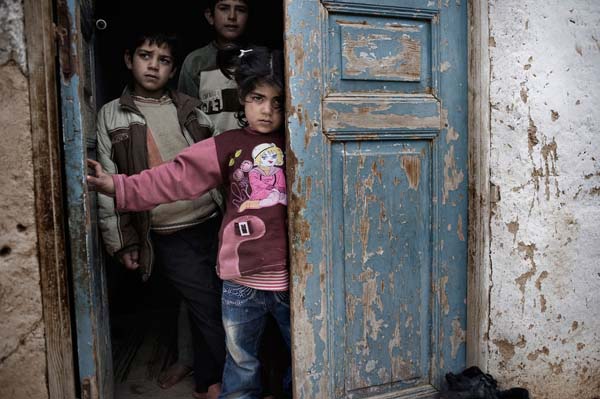 Syrian children have been subjected to ““unspeakable” suffering in the nearly three years of civil war, with the Government and allied militia responsible for countless killings, maiming and torture, and the opposition for recruiting youngsters for combat and using terror tactics in civilian areas, according to the first United Nations report on the issue.

The Jesuit Refugee Service has called for the government to set up a comprehensive resettlement programme here in Ireland for refugees from Syria. There are only 35 Syrian refugees in Ireland at present. David Moriarty, Policy and Advocacy Officer with JRS Ireland told Richard Crowley of RTE’s News at One that we need to radically increase that number and provide adequate services for them.

Click here for a previous report from the UNCHR on Children in Syria.

Find below the full press release from JRS Ireland.

JRS speak out on World day of Migrants and Refugees

The Jesuit Refugee Service has called on the Irish Government to set up a comprehensive resettlement programme for Syrian refugees in Ireland.

Speaking before the World Day of Migrants and Refugees Eugene Quinn, JRS Ireland’s National Director, welcomed the pledge by the Government this week of additional aid for Syria and said it could be put to good use by bringing Syrian refugee families here until peace is restored in their war-torn country.

““Syria is now recognized as the worst refugee crisis in 20 years. In a spirit of solidarity with the country’s suffering, Ireland can offer shelter and hope through a resettlement programme for Syrian refugees in Ireland. We did this very successfully in the past for Vietnamese refugees  and European refugees from the Balkan conflict. There is a desperate need to help the people of Syria and its neighbouring countries who are stretched beyond capacity in helping those fleeing the catastrophic situation there.”

JRS IReland is part of the Jesuit outreach worldwide to refugees. There are JRS groups working in Syria and Lebanon with refugees who are experiencing the trauma of war. JRS Ireland is in contact with these groups and Irish members have gone to work in the countries. According to David Moriarty  Policy and Advocacy Officer with JRS Ireland, they would be of great help in establishing a resettlement programme in Ireland.

Quoting Pope Francis’ message for the World Day of Migrants and Refugees, Quinn said ““We are challenged by the Pope Ã¢â‚¬Ëœto create a better world where migrants and refugees are not pawns on the chessboard of humanity .

The Pope urges us all to challenge Ã¢â‚¬Ëœthe globalisation of indifference’ and respond to the needs of the children, women and men who are forced to leave their homes Ã¢â‚¬Ëœfleeing from situations of extreme poverty or persecution in the hope of a better future’, continued Quinn, ““ and in Ireland, Europe and across the world, millions of migrants and refugees, facing life and death situations, cross borders seeking refuge and a better life. We’ve established resettlement programmes for refugees before and we can do the same for those fleeing Syria and play a small part in challenging that Ã¢â‚¬Ëœglobalisation of indifference.”

The Jesuit Refugee Service (JRS) Ireland mission is to accompany, to advocate and to serve the cause of asylum seekers, refugees and forcibly displaced migrants in Ireland. On a regular basis JRS staff members visit nine direct provision centres located in Dublin, Kildare, Laois and Limerick. Further information on JRS, available at www.jrs.ie