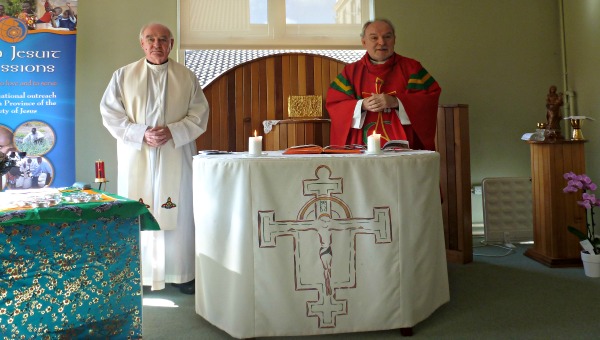 A small and friendly group met for the third Thanksgiving Mass in Dromantine on Saturday 20 September. The beautiful weather added to this lovely occasion. Fr John Guiney and Fr Martin Curry celebrated an intimate and joyful Mass.

John in his red vestments (in honour of the Korean Martyrs Feast Day) welcomed everyone in his usual easy way and got us all to give a short account of who we were and how we were connected to the Jesuit Missions. It was good to see so many familiar faces and get to know a little bit more about them and which relative or friend they were coming to pray for. We were also delighted to see some new faces among the group.

Martin gave an uplifting talk, speaking about the missionaries past and present and how much they sacrificed in leaving family and country and going to work in some extremely harsh and tough environments. But they went willingly in order to help others. He spoke about how the big projects are very important but the small personal connections are also as important. One incident he spoke of was when Richard O’Dwyer SJ having helped someone with a lift to a doctor while working in Chad, told how this had a ripple effect into helping someone else in a lifesaving way. This was only one of many such incidences that happened regularly when the missionaries were able to give one to one help to the local people.

Martin spoke of the parable of the landowner and his distribution of wages to his workers; they all received the same although some only worked for the last hour. This was to represent how God was so generous to us all and loved us no matter what. Martin also used the piece from Pope Francis to explain how ““A Christian is never bored or sad, rather, the one who loves Christ is full of joy and radiates joy” and while it was not always possible to be happy all of the time, it was something to always strive for as a follower of Christ. Martin spoke of the joyfulness of the celebration of Mass in Africa, even though the people were poorer than those in the West they celebrated with such enthusiasm and happiness.

We continued the service with the candle ceremony where everyone lit a candle in remembrance of particular friends or family members. 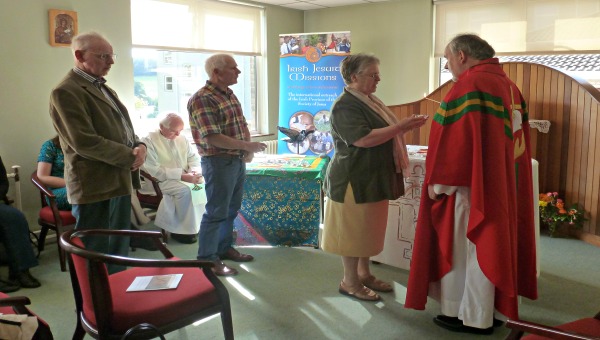 A very important part of the service was the beautiful music provided by Janice Gribben which uplifted our spirits and added greatly to the enjoyment of the Mass.
The Mass concluded and John expressed his gratitude to all those who had come and his happiness in enjoying such a beautiful day with those who had been able to attend. He invited everyone to lunch which gave another chance to mix and meet those who had attended. During lunch we had a very enjoyable chat and everyone went home very happy with the day.