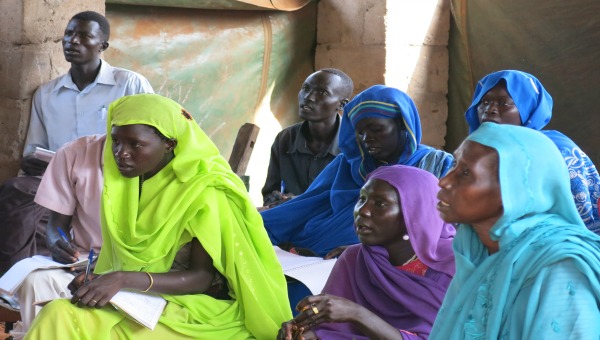 John Guiney SJ describes life in Maban refugee camp in the furthest corner of the northeast of South Sudan.

I travelled to Maban, a refugee camp in South Sudan last November. There two Spanish Jesuits, Pau and Alvaro, lead the Jesuit Refugee Service (JRS) team. Their work is supported by the Irish Jesuit Missions along with other Mission offices in Europe.

Maban is a tent city of 140,000 refugees fleeing the Blue Nile area conflict in Sudan and 60,000 returnees from different camps in Eastern Africa. There have been two evacuations of JRS and other humanitarian staff in the past year because of insecurity. All NGO staff except essential support staff was advised to move. However JRS and some humanitarian workers returned in September.

To say the work there is challenging is an understatement and the work of JRS and others is heroic under very difficult circumstances. Many have been living in tents in 40c heat in the past year.

Some of the greatest challenges in Maban

70% to 80% of the population of the camps and the local community - who were living there before the refugees arrived - are women and children. They are the most vulnerable people in war zones. Less than 20% of the children have access to primary school education due to lack of facilities, teachers and basic teaching materials.

It is an isolated area and inaccessible at present because of rebel movements in the area. Basic supplies are not easy to acquire locally and everything has to come in by plane, especially in the wet season, which is slow and expensive.

On 13th November, the Sudan Government (north of the border) bombed Maban county. This is the first time crossborder bombing took place in this area since Independence in 2011 and casualties were brought to the hospital in Bunj town on the day of my arrival. Security is fragile and its maintenance depends on so many factors such as the peace talks in Addis, the behaviour of local militias, their commanders and developments in Blue Nile area.

A capital of goodwill

JRS’ efforts in Maban have had a short and interrupted year but have made real connections to the refugee community, local host community and other stakeholders. There is a capital of goodwill amongst all the actors in the environment. Many people mentioned spontanously that the JRS presence in the area makes such a difference. This is great credit to the present team.

The  JRS’ presence in Maban is indeed ensuring Christ is there in the truest sense, not only for Chrsitians but also for the thousands of Muslims in the camps.Their personal, compassionate and listening presence and their dedicated service in education, psychosocial work and pastoral outreach to all refugees is a real sign that God has not forgotten them but has come to be amongst them in this - the most isolated refugee camp in the world.