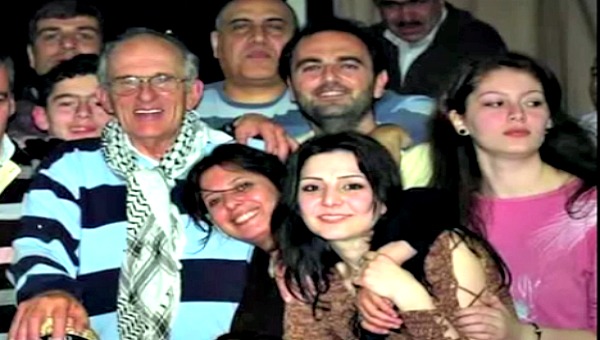 Fr Frans Van der Lugt SJ was killed in Syria; he was abducted by a gunman and shot outside his home in Homs. News of his death raced across the world.

Fr Frans was no stranger to the media. He had made YouTube videos during the Siege of Homs to draw international attention to the plight of the Syrian people trapped inside the city. He had chosen to remain in the Old City despite the danger and was probably the last European to do so. He appealed to anyone who would listen on YouTube.

“Christians and Muslims are going through a difficult and painful time and we are faced with many problems. The greatest of these is hunger. People have nothing to eat. There is nothing more painful than watching mothers searching for food for children in the streets…I will not accept that we die of hunger. I do not accept that we drown in a sea of hunger, letting the waves of death drag us under. We love life, we want to live. And we do not want to sink in a sea of pain and suffering.”

A psychotherapist and Zen Buddist

Fifty years of Fr Frans’ life had been lived in Syria. He was a psychotherapist, born and educated in the Netherlands and was in his twenties when he left for the Middle East.

He studied philosophy in the Netherlands, Arabic in the Lebanon, and theology in France where he prepared a PhD in psychology and psychotherapy. In 1971 he was ordained a priest with the Society of Jesus and from 1976, travelled in Syria between the major cities of Damascus, Homs, Aleppo and Latakia giving lectures in spirituality, theology and psychology. He recognized that the future of Syria was dependent on Christians and Muslims living together in peace and his spiritual retreats for young people included followers of all religions. A student of Zen Buddism, he practiced yoga and meditation daily to instil inner peace.

al-Ard/The Earth: where every stone had a story

Fr Frans had a gift for bringing people together and honoured the earth as our common human connection. When land was donated to him on the outskirts of Homs, a spiritual centre was founded named ‘al-Ard’ meaning ‘The Earth’. The varied stones used for the buildings were recycled ones, transported from disused buildings elsewhere in Syria: every stone had a story. At the centre of al-Ard was a building – neither church nor mosque – where he taught meditation and yoga.

Working the land brought people of different religions together and produced fruit and vegetables for their family tables. It created activities too for mentally disabled people of the surrounding villages who were driven to al-Ard each day in his old VW van. A vineyard was cultivated there overseen by a French specialist who lived at al-Ard for two years. It produced a French wine that was unique to Syria and a source of pride for all who worked on the project.

Al-Ard was the material expression of the aspirations of Fr Frans’ work in Syria. To date, its condition is uncertain as it has been greatly affected during the Syrian war years. 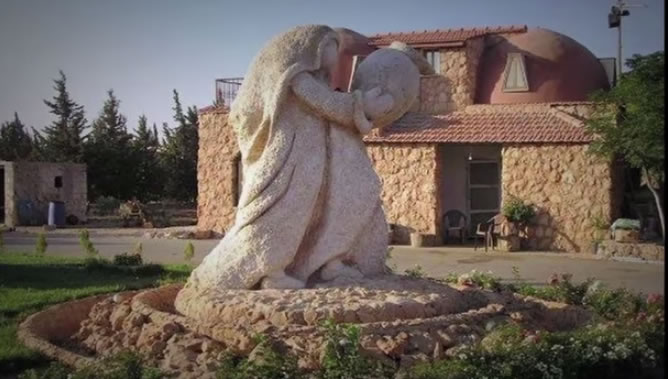 A sculpture before one of the many bulidings at al-Ard

A common place of being

For years and well into his 70s, Fr Frans organised the “The March” and led hikes, sometimes for several days, through the Syrian mountains and countryside. The hikes attracted young men and women, Christians and Muslims alike, from all over Syria. He believed that the basic human experience of walking, eating, sleeping and feeling tired together created what he called “a common place of being” and wrought a simple human unity and comprehension that is deep and connected. He maintained that it was important to start with human beings, and not from their religion.

He once told a reporter “You know, I don’t really like religions – I believe in the spiritual experience that is the source, the initial inspiration of faith. Religions are always losing that inspiration, that direct experience; then they are not in the true way. I mean, they are in the hypocrisy of speaking for the spirit with which they have lost touch.”

To the end, Fr Frans chose to remain devoted to Syria and its people whom he loved, regardless of their religious persuasions.

“I have learned about the generosity of the Syrian people. If these people are suffering now I want to be in solidarity with them “ he said, “As I was with these people in their good times, I am with them in their pain.” 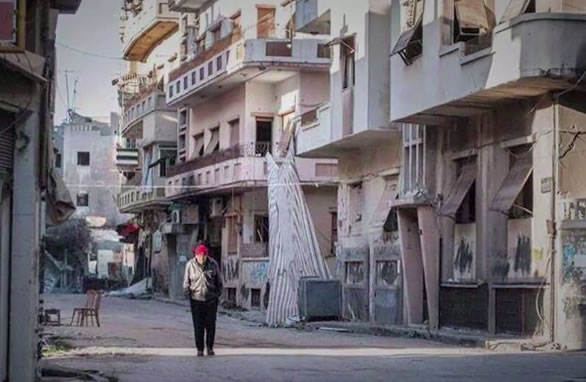 A solitary Fr Frans walking the streets of Homs, Syria

Go ahead, carry on

Fr Frans’ name lives on and is associated with care, education and the integration of peoples. In 2014, the Jesuit Refugee Service opened the Frans Van der Lugt Educational and Social Centre in Bourj Hammoud, Lebanon. The Centre teaches children during the day and is a distribution point for families needing emergency assistance.

Fr Frans always encouraged moving forward: he is remembered for his mantra “ Go ahead, carry on”. The Syrian people need this reminder and our prayers for peace in their country even more today.