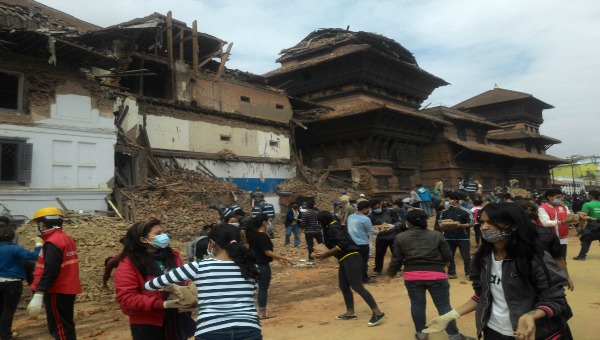 On Saturday, a few minutes before noon, a massive earthquake struck Nepal. The epicenter of the quake, which registered 7.8 on the Richter Scale, was approximately halfway between Kathmandu and the town of Pokhara in central Nepal. Deaths and destruction have been reported from as far away as Tibet, Bangladesh, north India and Bhutan, but the major damage has been here in Nepal. 39 of Nepal’s 75 districts have been seriously affected and more than 3000 deaths and 6000 serious injuries have been tabulated.

The total number of casualties is sure to be much higher. Nepal’s underdeveloped communications system, and lack of government coordination, is such that many deaths will never be reported. On Sunday, at about 1 PM an after-shock registering 6.6 shook the country again. Significant tremors occurred again at 4.20 AM this morning, Monday.

Although the government has intensified the rescue efforts in and around Kathmandu, lack of equipment and accessibility has made the rescue operations slow. Hundreds of people are feared to be still trapped inside the rubble and debris of the collapsed buildings in the capital. Many historical buildings have been reduced to dust. Reports received so far suggest that many villages perched on mountainsides are devastated or struggling to cope.

The earthquake has spread horror from Kathmandu to small villages and to the slopes of Mount Everest, triggering an avalanche that buried part of the base camp packed with foreign climbers preparing to make their summit attempts. At least 18 people died there and 61 were injured.

In the capital, the government has announced free treatment to the victims. But the hospitals are overcrowded and many are not in a position to offer treatment. The people are still in shock as the aftershocks continue. Most of the people are staying out in the open places as they fear to go back to their partially damaged houses.

The main highways in and out of Kathmandu are blocked due to the landslides caused by the earthquake. This has hindered rescue teams that tried to use mountain trails to reach those in need.

At the moment the help is being rendered rather in a random manner than organized. The local communities and all those who are not affected by the quake are involved in rescue operations. Nepal Jesuit Society has responded quickly to this terrible tragedy. St. Xavier’s College has reached out to two remote villages in Dhading district providing the villagers with tarpaulin sheets to sleep under and basic food material. There is another relief material distribution under way in Kavre district. Many roads are blocked and so it is hard to reach by road in many places. We hope to reach out to some more villages where relief work has not been done so far. For this we count on your help and prayers.

The media has broadcast dramatic images of the massive destruction to the Kathmandu Valley’s temples and religious monuments. It is true that a number of historic sites have been reduced to piles of rubble, along with many of the city’s traditional brick and tile homes. A large neighborhood near the Swayambhunath stupa has been wiped out, and the bridge connecting them to the city center has collapsed.

The damage to more recently-built reinforced concrete structures, though less obvious, is also significant. Consequently, many people are terrified of sleeping in their homes and have erected tents and make-shift shelters in open areas for the past two nights. Throughout the night one can see people simply walking the streets, or huddled under blankets by the side of the road, for lack of shelter. Unseasonal rain has sent night-time temperatures plummeting, adding to the misery of those displaced.

Much media attention has been given to the avalanches at Everest base camp because well-equipped foreigners are able to send news via social media; but it is the rural poor in districts around the epicenter who are suffering more profoundly. The destruction of homes in outlying villages has been even more catastrophic than those places appearing in the news.

Schools were declared closed for five days; and most shops, businesses and offices have not re-opened. It is unclear how badly the food supply chain to Kathmandu has been disrupted. Prices for vegetable and staples have already sky-rocketed. Phone service and electricity in the heart of Kathmandu Valley have gradually become more available, after a complete cut-off on Saturday. The service is very intermittent.. Fortunately, the 3G / broadband internet in the capital area has remained open since the quake, allowing some communication to the outside world via the internet. 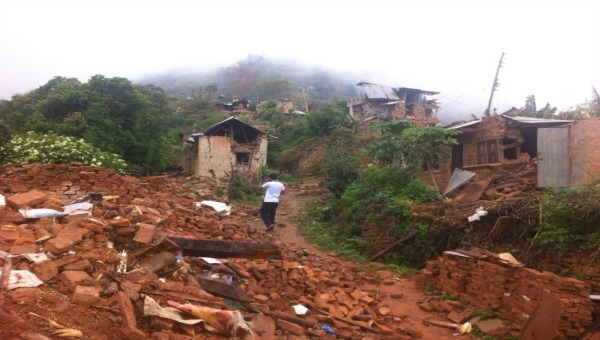 One great concern now is water supply and food. As stored food and water supplies diminish, suffering will increase. In addition to providing medical care to those who were severely injured, medical teams are concerned about the possible outbreak of diseases, especially cholera, because of damage to the water supply system.

Kathmandu’s small airport is strained to the limit as planes carrying emergency supplies and relief workers arrive. Meanwhile many commercial flights continue to operate in order to evacuate large numbers of tourists and trekkers. Local and international search-and-rescue teams continue to dig through the remains of collapsed houses, both here in Kathmandu, and in rural areas, hoping to find survivors before the ominous 72-hour mark passes. At this writing, they have less than 20 hours before that deadline.

Once the immediate rescue operations are completed, and emergency first aid is provided for the most seriously-injured, major recovery efforts will continue for those who have been made homeless, been disabled, or lost their livestock and other means of livelihood. It is critical that those in heavily affected villages, and not subject to the media spotlight, be helped.

The Jesuits of Nepal, along with other religious communities and the Vicariate of Nepal, are fortunate in that we suffered no loss of life or serious injury. There has been some damage to buildings at our institutions. When the risk of after-shocks has passed we will assess the situation more closely, in order to assure the safety of those we teach and serve.

St. Xavier’s schools and college and St. Mary’s school have opened its compound for anyone who wants shelter.

The prayerful support, and material assistance of our brother Jesuits and their colleagues, the wider church, and of the general public, will be of enormous help to us as we provide aid to those in immediate dire need, and begin to help Nepal recover from the devastating impact of the earthquake.

Our core team meets tomorrow morning at 8 am to plan out the mechanism with email ID/Phone to carry out the work and then I will send you the other details. Definitely, we need more financial help when it comes to the rehabilitation phase. We hope to select a few areas that are most affected.

Thanks for your prayers,