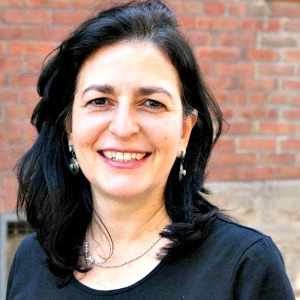 Passion to change the world

Jenny Cafiso has been Director of Canadian Jesuits International (CJI) for 11 years. Her previous positions were with the Jesuit Refugee Service and the Canadian Development and Peace organsation.

In an interview with the Irish Jesuit Missions, Jenny explains that since her youth, she has been involved in social action for justice and campaigning activities. As a member of a large youth group led by a very progressive priest in Italy, she grew up with a passion to change the world;nothing less would suffice! Jenny felt her understanding of her faith called her to help create a more just world. She took to heart the words from Matthew 25: ““For I was hungry and you gave me food, I was thirsty and you gave me drink, a stranger and you welcomed me, naked and you clothed me, ill and you cared for me, in prison and you visited me.”

Later in her early 20s when Jenny settled in Canada, she became involved with the “Grape Strike”: US Farmworkers in California Campaign for Economic Justice and thus with migrant workers’ issues. She recalls that her eyes were opened to the problems Latin America was experiencing. At the time, Dependancy theory was in vogue explaining that resources flow from a ““periphery” of poor and underdeveloped states to a “core” of wealthy states, enriching the latter at the expense of the former, essentially as a result of the way poorer states are integrated into the world system. The theory provided a framework of analysis for her growing understanding of unjust global relationships that has underpinned her life’s work.

The CJI is an organisation in English speaking Canada focusing on international global solidarity and a Jesuit apostolate centered around social justice. In the past, it was associated with missionaries and in the present day, has adapted to a new way of engaging in solidarity work based on an understanding of faith and justice. CJI is composed of a small team based in Toronto, Canada and supports Jesuit works - primarily for refugees in education, social services and agriculture - in Africa, Asia and Latin America.

The organisation works with overseas partners, raising funds for projects and promoting an awareness of unjust global relations generally, and more specifically, the activities of mining and resource extraction industries that sustain them. Over two thirds of the world’s mining companies are Canadian. There are many places in Africa, Asia and Latin America affected negatively by mining where waters are polluted and communities are displaced. CJI advocates with other NGOs in campaigns such as ““Publish What You Pay” that calls for mandatory payment disclosure and transparency for companies registered and/or publicly traded in Canada.

Within Canada itself, the organisation raises awareness of its work and underlying social justice issues with the general public and recently - through its new Youth Outreach programme - in Jesuit and Catholic schools and youth groups. A Youth for Others conference with 80 students was organised recently and included workshops with missionaries who gave the benefit of their experiences on youth based issues, for example, young people in Jamaica.

The yearning to affirm life

In the face of so much global injustice, Jenny is aware that it can be all too easy to allow discouragement to creep in. She recalls time spent with Libyan people in a refugee camp. There they told their stories: some had experienced brutality; hardship; loss. Did they ever feel overwhelmed, despairing, even suicidal? The question took them by surprise. Their answer was “No” because as they explained, they are never alone and always have to take care of others.

To her continued amazement, people in refugee camps want families and it is usual to give birth to children there. In Canada and the developed world, it is common to delay having families for various reasons: waiting for the right time in one’s circumstances, career or life. Yet in the camps with no water, electricity, past unheavels and uncertain futures due to conflict, people do and want to have children.

Jenny concludes that people who have a right to be hopeless, don’t succumb to it - such is their yearning to affirm life. “If you want to see a hopeful vision of the future, ask the mothers of the children of war.”she says.

She feels she has been fortunate to have met many amazing and courageous people both in and out of the Church and been inspired by their deep sense of commitment. She is grateful to have occupied a priviliged position that allows travel to unusual places; that goes into the heart of communities in Africa. Their courage is inspiring. It is impossible to cease working on their behalf.

This is what gives Jenny hope for the future. Their courage is her antidote to cynicism.