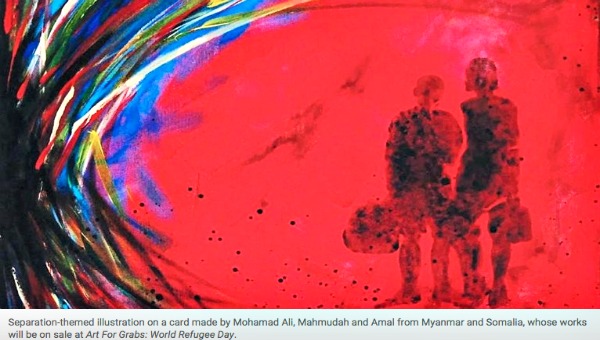 June 20th is a special day. It is World Refugee Day. It’s becoming increasingly notable as there are over 50 million people on the road as refugees worldwide as a result of conflict, terrorism, natural disasters and environmental degradation.

The desire to live in a secure society with the opportunities to create a better life for oneself and loved ones is motivation for many who decide to leave their familiar surroundings and undertake often perilous journeys into the unknown.

During the month of June, the Irish Jesuit Mission office is honouring the courage and perseverance of refugees with a series of articles based on Jesuit perspectives and works with refugees in Africa and the Middle East.

We begin with some insights into refugee life, shared by Jenny Cafiso, Director of Canadian Jesuits International (CJI).

A yearning to affirm life

Jenny Cafiso has been Director of CJI for 11 years and has been involved with refugee camp projects for many years. Jenny is aware that In the face of so much global injustice, it can be all too easy to allow discouragement to creep in.

She recalls time spent with Libyan people in a refugee camp. There they told their stories: some had experienced brutality; hardship; loss. Did they ever feel overwhelmed, despairing, even suicidal? The question took them by surprise. Their answer was a definite “No”. They explained that they are never alone and always have to consider and take care of others.

To her amazement, people in refugee camps want families and continue to give birth to children. Across the developed world, it is usual to delay having families for various reasons: waiting for the right time in one’s circumstances; career; life. Yet in the refugee camps, with no water or electricity, with past upheavals due to conflict and facing uncertain futures, people do and want to have children.

Jenny concludes that people, who have a right to be hopeless, don’t succumb; such is their yearning to affirm life. ““If you want to see a positive vision of the future, ask the mothers of the children of war.”

For the full interview, see An Antidote to Cynicism: interview with Jenny Cafiso

With your kind assistance, the Irish Jesuit Mission office supports a number of projects that help refugees and displaced people live in safety and work towards restoring their lives. One such project is in Akol Jal, South Sudan.