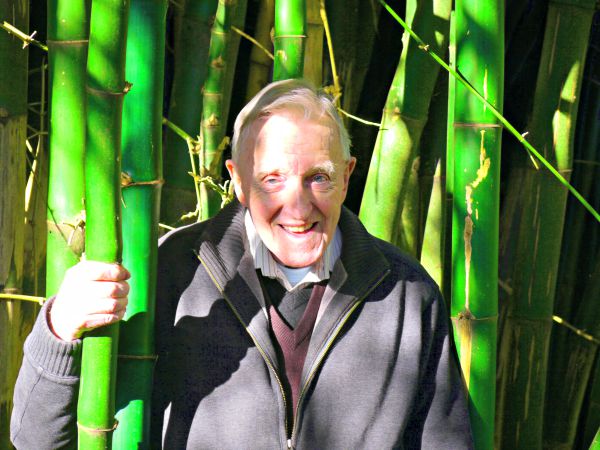 Fr Michael J Kelly SJ continues our series of Jesuit stories in “Irish Men behind the Missions”. This year marks a special one for him: August 22nd was the 60th anniversary of his first arrival in Zambia in 1955.

Although young and inexperienced then, he was greatly excited at the prospect of sharing with others his life and whatever expertise he had and thereby communicating the Good News of Jesus Christ. He shares his unique story”

A spirit of Céad Míle Fáilte

I am now old and somewhat decrepit, but blissfully happy that I can still share myself and the word of God with my Zambian sisters and brothers. I am deeply indebted to them for the sincerity with which they welcomed me into their lives and society. Never at any time did I feel like an outsider or intruder.

Although the words were not used, the spirit was always that of Céad Míle Fáilte. I felt this right from the outset, though the feeling was deepened when I became a Zambian citizen in the mid-1960s, a step that I never for a second regretted, though I recall the tears it caused to my Mother!

I spent most of my working life in Zambia in education – teaching and administering – at secondary school and university levels. It is a great pleasure today to meet so many who had been “through my hands” at school or university and to see them successful in life, most of them happily married and parents of lovely families, some of them grandparents, and some of them priests or religious. But there is also the sadness of knowing that many had died, especially that many died from AIDS. Very soon after the world became aware of this scourge, I saw that it was a challenge that we would have to do something about through our schools, not only in Zambia but all over the world.

This realization drew me into thinking, teaching, writing and speaking about the give-and-take between AIDS and education, into speaking out on behalf of orphans, and eventually into a wide range of AIDS-related areas.

In my AIDS work I have met and been influenced by many remarkable people infected with the disease. I don’t think I could have continued with what I was doing were it not for them, above all the women and the children. I felt driven by their suffering and the way it had undercut their very humanity. But equally I felt driven by their resilience, their spirit, their determination, their courage, and their cheerfulness.

Most uplifting of all was Brigitte Syamalevwe, a highly educated Zambian woman who was diagnosed with HIV in 1992. Instead of staying at home feeling sorry for herself, Brigitte travelled around, speaking fearlessly, feelingly, and powerfully about the epidemic and her situation.

She refused to take life-saving anti-retroviral drugs when these were offered to her, saying she would do so only when the poor of Zambia, and particularly the women, could also have access to such treatment.

Even at the very end, when I had paid for the drugs that could save her, she told her family not to collect them but to leave her in God’s hands. And so, overwhelmed by grief, weariness and illness, she died quietly and peacefully, letting her great spirit soar to the God whom she had loved and served so well.

Brigitte was an Easter witness in the darkness of HIV and AIDS. You just had to be inspired by her. And she is not alone. She typifies the innumerable great women in Zambia and elsewhere who are living courageously in all sorts of very difficult situations. She and people like her are the ones who show the strength of the human spirit and give real promise that we can make this a better world.

Coming back to myself and thinking about my 60 years in Zambia, I wouldn’t ask for a minute of them to have been any different for me. They have been 60 glorious, happy, fulfilling, satisfying years and I thank God for every second of them.

Of course there were setbacks and difficulties, very especially the grief and anguish of seeing the way AIDS was ravaging the people.

But the overwhelming picture is one of joy and gladness and an awareness that God was working all things together for good. I ask you to join with me in praising and thanking God that it has been so.