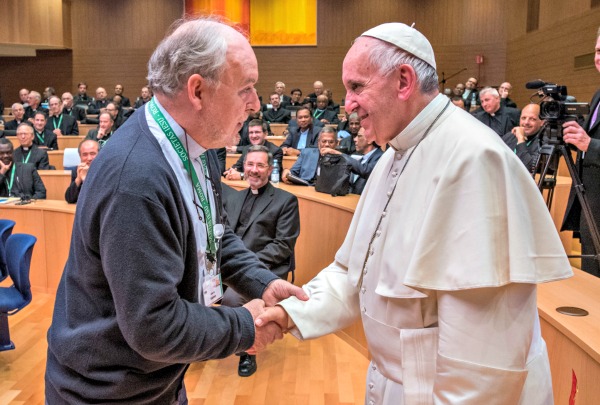 An historic meeting in Rome

His core message to the Jesuits was to exhort them to be men who bring consolation to the people of God, to go where people are hurting and bring them hope in their suffering.

It was a momentous occasion to have a Jesuit Companion who is also the Pope, advising his Companions to live their Jesuit vocation in the footsteps of St Ignatius our founder, by always discerning the good Spirit in their lives and work.

Election of a new Father General

Before the historic visit, the election of the new Father General took place on the 12th day after a week of prayer and ‘murmuratio’—consulting with one another in one to one conversations.

Fr Arturo Sosa SJ from Venezuela was elected. The choice was a special one because he is the first leader of the Jesuits to come from the southern hemisphere. It also seems a wise decision because the majority of active Jesuits now live in Central and Latin America, Asia and Africa.

In the 476 years since its founding, the Society of Jesus has convened only 36 General Congregations. A General Congregation is always summoned on the death or resignation of the head of the Society— the Superior General—to choose his successor, or when the General decides action is needed on serious matters that he cannot or does not want to decide alone. In December 2014 Fr Adolfo Nicolas SJ announced his intention to resign and GC36 was called to elect a new Superior General.

A number of guiding documents ensued including one on mission and governance. However, the greatest gift of attending such a rare gathering was the experience of companionship—being friends in the Lord across the frontiers of the world. Two hundred and fourteen members from different provinces and regions attended. In such diversity of cultures, colours and ideas there was a real sense of unity in mission and solidarity. There was a real sense of joy in being called to make the world a better place through the inspiration of the gospels and the spirituality of St Ignatius and Companions. It was indeed a blessed occasion for all. Rowing into the deep together

The logo for GC36 was inspired by Pope Francis’ message to the Jesuits on the 200th anniversary of the restoration of the Society of Jesus in 2014. He urged Jesuits to discern in difficult times; to be receptive of and obedient to the will of God; to row with him in the service of the Church as Jesus called to his disciples: “Put out into the deep.”

On the logo, the flame above the cross represents “a fire that kindles other fires,” a link to Decree 2 from GC35. IHS represents the Society’s boat in the Church, the waves are the sea, the cross the sail where the Spirit blows, helping members of the Society and their collaborators row into new frontiers with the faith that does justice.