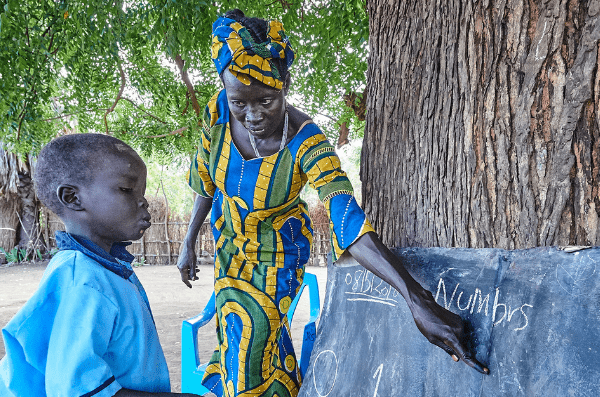 Irish Jesuit Tony O’Riordan was on RTE’s Today with Seán O’Rourke while on a short visit home to see his family last week. He discussed his work with the Jesuit Refugee Service (JRS) South Sudan, and the insights he has gained during the year he has spent in the war-afflicted country.

A Year in South Sudan

O’Riordan took on the role of JRS Project Director for Maban in the north-east of South Sudan in early 2018. The region has four refugee camps, each one the size of the city of Limerick. The region is remote, cut off from the outside world due to impassable and dangerous roads. Goods are delivered to Maban on UN aircraft, which are also used to bring humanitarian aid workers to the region. Although he was used to seeing poverty and deprivation in Ireland, he suffered culture shock on arriving in South Sudan. Years of civil conflict has resulted in food scarcity making hunger and malnutrition are a reality for many people. Accommodation in the refugee camps consists of huts made from just sticks and mud with a plastic sheeting roof for protection in the rainy season.

Refugees are ‘Caught Between Conflicts’

Refugees in the Maban camps are mainly from the Blue Nile region of Sudan. They fled to the relative safety of the south to escape violence and war in the region. These people have found themselves ‘caught between conflicts’ says O’Riordan, as South Sudan is embroiled in its own civil war, causing millions of its people to be displaced. He makes the point that most Mabanese people have themselves been refugees due to conflicts there over the years. Now, as returning refugees, they find themselves as the host community and outnumbered by Sudanese refugees in the camps by four to one. By his account, the refugees are still welcomed and there is a shared solidarity between the host and camp communities.

There are more than 60,000 children of school-going age in Maban, and more than 40,000 of those live in refugee camps. However, there are only 10 qualified teachers. This is a problem that JRS has been tackling by setting up a teacher training college, which currently has 511 students enrolled. One of the most challenging moments for O’Riordan was a ‘devastating’ attack last summer on the compounds of JRS and other humanitarian aid organisations in Maban. The classrooms off the teacher training college were badly damaged, which stopped classes, and created an atmosphere of fear and tension. The compound where the trainees lived for three days a week was also gutted, with its contents taken and destroyed. All that was left were the exam scripts of the teachers which were strewn across the floor. The students had to resit their exams, but their determination to finish their education despite these challenges won through and classes have now resumed. JRS is now in the process of rebuilding the damaged compound. It bought two plots, and built a fence to protect the land, with the help of funding from Irish Jesuit Missions and Misean Cara.

Last September saw a peace deal brokered in South Sudan, which O’Riordan reports has made a significant difference to the morale of its people. The relatively safety of the roads has made them passable and allowed people hiding in fear of their lives to re-emerge in their communities. Whether it can hold warring factions together in the long-term is something that remains to be seen, but is sincerely hoped for.

You can listen to the full interview here.