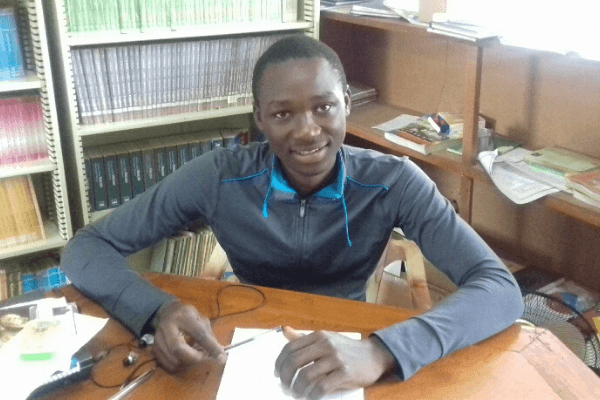 Education is a tool not only for imparting knowledge, but for achieving societal and political change.

This month, our colleague Noelle Fitzpatrick left Ireland for South Sudan, to take up a post as Country Director with the Jesuit Refugee Service. On a visit to the country last August for the Xavier Network, a group of 13 Jesuit organisations who work together for global justice, she visited Loyola Secondary School, in Wau and was touched by a story of resilience and courage from a young boy she met there.

Elias is a 17-year-old refugee from Sudan, whose parents moved to South Sudan after independence in search of a peaceful life for him and his siblings. They are one of thousands of families who are caught between conflicts.

“I was still in primary school when the war in South Sudan broke out. I remember being rushed home to safety from school by my grandfather amid the sound of gunshots. The resulting war would prove to be devastating for me and my family.

In 2015, two years after the war started, my father disappeared. He had fled to the bush for safety to escape being targeted by militias, as an enemy of the state, where he joined others who were in opposition to the government. I have not seen him since. A year later, the conflict again came to our door in an outbreak of violence by government troops and local armed gangs, who shot and killed civilians in my village, causing my family to run away, in fear of our lives. Like many others, we took refuge in the compound at Wau Cathedral for seven months. I went to school during the day, but me and my brother returned to the compound at night for protection from the army which was capturing young boys from ethnic groups associated with the opposition. Even now, insecurity remains and thousands of people who fled their homes around Wau continue to live in protected areas. Some had begun returning to their homes but there is still a lot of fear and mistrust, despite the peace agreement which was signed last year.

Loyola Secondary School has been a lifeline for me, throughout my family’s troubles and the stresses of war. I received a scholarship to the school which paid for my fees, uniform and food. Without this support, going to school would not have been an option for me, as there was no money spare for my education. My education has been about ‘the heart, not just the mind’, as Loyola school, like all Jesuit schools strives to create “men and women for other.”

‘I worry about my father, who is still missing, and hope that the fragile peace in my country will last, so my family can be together again.’

Almost half of the children at the school are in receipt of scholarships, funded by organisations including Irish Jesuit Missions. Elias has left school now and hopes to become an electrician, a far brighter future than one he would have faced without an education.

The war in South Sudan has made stability and security hard to find. It has forced families to flee from their homes and villages, leaving behind possessions and abandoning their crops, causing food shortages and entrenching poverty in an already vulnerable place. The conflict which began as a divide between the Dinka and Nuer people, has fragmented in the years since into more chaotic, inter-clan fighting. Increasing the level of education in the country, where three-quarters of people are illiterate, would foster skills of dialogue, communication and negotiation which are important to building a lasting peace.

The role of education

The subject of girls’ education is now, rightfully, getting the attention it deserves, such as in the JRS campaign Make Room For Her, which highlights the challenges girls face in accessing schooling, especially in poor communities and refugee settlements. In South Sudan, the obstacles that girls meet are even greater, and the need to overcome them more important. Education for girls helps them to escape being married off as children so that their families can receive a dowry payment in cattle.

Boys are equally vulnerable to the stresses and difficulties of living in a conflict zone, and education also offers them an alternative to this. They are vulnerable to conscription into armed gangs, where they could at least feel assured that they would have food to eat and a purpose. Attending school provides them with better options for their future, and the chance of a sustainable, stable job. But more importantly, as those who hold the positions of power in this traditional society, it is vital to educate the future generation of men to enable them to find a peaceful resolution to conflict.

Supporting the education of a boy like Elias is contributing to the peace and stability of the world’s youngest country.