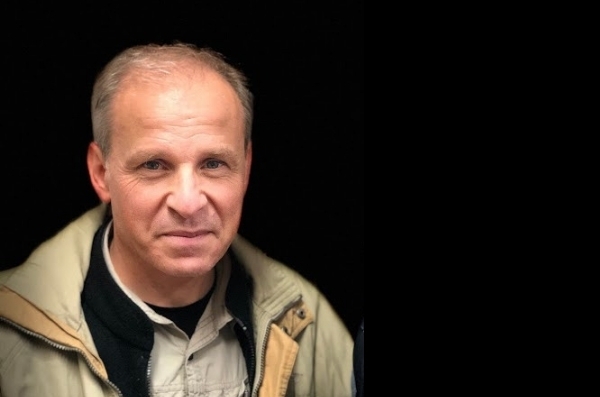 Fernando Azpiroz SJ is an Argentinian Jesuit who is Director of Ricci Social Services, in the China Province. He visited Ireland last week to update us about the progress the communities within China and Macau are making and to share the story of their journey.

The centre I work in is now called Ricci Social Services, but began as Casa Ricci, a name we still use informally. Casa means home in Spanish and Portuguese. When the Jesuits were expelled from China in the 1950s because of the civil war, they came to Macau. They did not have anywhere to live, and were given an old house which they called Casa Ricci, after Matteo Ricci [the Italian Jesuit who travelled to China in the late 16th Century, where he lived until his death in 1610].

One of the Jesuits who arrived in Macau from China was Fr Luis Ruiz. While there, he saw thousands of people escaping China, arriving as refugees from the civil war. So, he started to welcome them in to Casa Ricci and provide them with the basics – food, rice, and eventually employment. Some were elderly, they had no family, and some had physical and mental disabilities. Casa Ricci became somewhere they could come to find respite. They ate some rice, and some then started to work together with the Jesuits. The place developed into a social services centre, to deal with the social problems which were emerging as a result of the civil war. In later years, Fr Ruiz brought the original concept of Casa Ricci wherever he went, including to mainland China where he saw people who were suffering with leprosy.

30 years later, in the late 1980s, an old priest in China invited Fr Ruiz to visit a remote island which took a full day to travel to, after several boat journeys. He found 80 people there, who lived in a government-run institution, but were essentially alone. Some had major disabilities; they were blind, they had open wounds on their skin, some were missing parts of their hands and feet. No visitors ever came to the island. When he saw the situation of these people, Fr Ruiz realised that he could help. He resolved to find a way to work with the government to bring resources to such an isolated place.

He bought an electricity generator for the island, then had running water installed. The diet of the islanders had consisted of just rice, so he imported meat and vegetables to nourish them. He then realised this wasn’t enough; that what was needed was a community. He asked a government director for help, who assured him that nobody would come to the island, no matter how much money they invested in it.

Fr Ruiz was not deterred and invited the community of Indian religious sisters who were working in Macau with him to travel to the island, to work alongside these forgotten people. It was difficult for the patients to accept that the sisters were there for the long-term, but as they grew to trust them, the community flourished. The sisters take care of health services like wound dressing, and look after the elderly. They bring people to the nearby town to see the doctor. There were no roads in this rural region until recently, so they did not travel by car, but by buffalo.

China has changed so much, that people who had previously never left their village in the mountains now go to travel on one of the fastest trains in the world. Rapid development has meant the arrival of a network of highways, a rail system and airports, and yet there are still leprosy-affected people in the countryside. They are people on the margins of society, who are now being integrated. The local people are no longer afraid of them.

This change has happened because of the building of the community which was started by Fr Ruiz and the sisters. It is a community of solidarity, with a clear goal to defeat discrimination. With the lessening of stigma and fear, the government becomes more willing to invest and help. It is like a plant growing.

The story of overcoming discrimination against people with HIV/AIDS also begins with the building of a community of solidarity. The first place that we were involved with in 2005 was a place of death. The government had asked Casa Ricci Jesuits to go and work there, as they wanted terminal AIDS patients to die outside of hospitals. With the use of anti-retroviral (ARV) treatment the patients’ prognosis was no longer terminal. This development, combined with a better living environment mean that they started to recover. The community became one of the first places in China where HIV patients could live.

The sisters who were present in the communities of leprosy affected people, came to integrate and work with people with HIV. As patients’ conditions became stable, some could go back to their own lives. They could re-establish relationships with their families, with the help of the sisters. Some were very poor, some were children who had been abandoned by their extended families as their parents had died of AIDS, and they themselves had the stigma of being HIV-positive.

In the community all kinds of people share their humanity, they learn and teach solidarity. This is why we always stress the importance of community. The communities have a profound impact on how society perceives someone with HIV or who is affected by leprosy. It also works the other way around. The community of solidarity helps to heal the wounds in the relationship between the outside world and the people who have been marginalised because of illness.