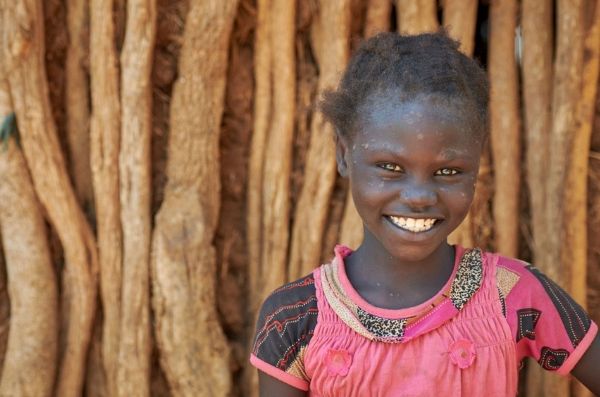 “In South Sudan, everything makes a difference, even a smile.” Those were the words that were said to Fr Joseph Afulo SJ, Provincial of the Eastern Africa Province by a Jesuit working in the region. Fr Afulo visited Ireland last week, and met with us in Irish Jesuit Missions where we discussed the progress and challenges of the six countries in East Africa where he oversees the work of the Jesuits, and in particular the ongoing difficulties faced by people in South Sudan.

The 13 organisations which comprise the Xavier Network took the step last year of coming together as a group to streamline the work of Jesuit organisations in the country. The results of this new initiative will be assessed at the end of this year.

In every place that Fr Afulo travels to in South Sudan, he encounters hundreds of children who are not in school. The war and its consequences have denied them the chance to get an education, leaving them severely restricted in their options for the future.

Although a peace agreement was signed last year which has increased stability in the country, it is still suffering from massively increased inflation, making everyday necessities far too expensive for most of the population so food shortages are still a real concern. Another casualty of the inflation rate is school fees which are no longer affordable for families.

“When I go to Maban, there are so many children, hundreds who do not have an opportunity to go to school. It struck me there that this is same thing that I see in Rumbek, in Wau, even in the capital, Juba. Education in South Sudan is key. In Wau, we have the high school which has a student population of 700. Most of these children are coming to school from refugee camps so they need to be fed, which we are able to do thanks to the contributions and support of the Xavier Network members.”

There is a Jesuit-run teacher training college in Cuibet, but to meet the demand for teachers in the country Fr Afulo and others are looking at different approaches. Many teachers for schools in South Sudan come from Kenya or Uganda. To increase the number of South Sudanese who become teachers, the possibility of sponsoring students who in turn will work with the Jesuits for a few years after college is being examined. Partnership and collaboration with other religious orders in the country is also something that is ongoing.

The impact of April’s military coup in neighbouring Sudan is something that concerns Fr Afulo but he can’t predict how it will affect the situation in South Sudan. It could go either way, he says. The former President of Sudan, Omar al-Bashir was part of the problem in contributing to insecurity in the country and the present situation could be used to South Sudan’s advantage.

Fr Afulo concludes our conversation by acknowledging that although we cannot know what will happen in the future, that “everything that is done in South Sudan makes a difference” making our collaboration with communities there worthwhile.