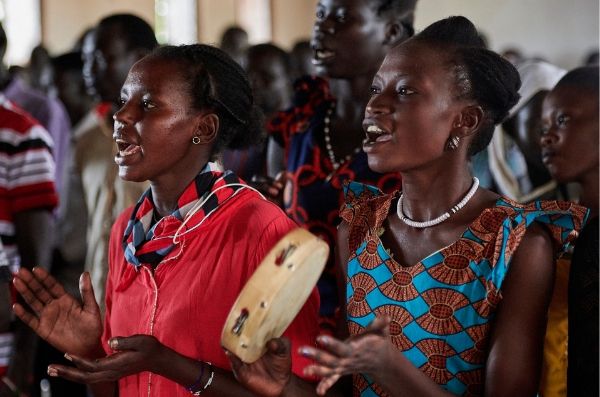 Noelle Fitzpatrick is the new Country Director for JRS South Sudan and has previously worked with Irish Jesuit Missions and the Xavier Network. In this article she looks ahead to the future for South Sudan.

“When people have an opportunity to learn, socialise and self-actualise in a safe, friendly environment, their sense of themselves, their sense of the world and their place in it blossoms” says Noelle Fitzpatrick, the new Country Director for JRS South Sudan, who sees a focus on providing quality education and on not losing sight of hope as crucial to the next decade.

It is challenging to ‘look ahead’ and reflect on what the next 10 years might bring in South Sudan. A recent meeting of Country Directors at the JRS International Office in Rome, the Director of Mission & Identity, Michael Smith SJ, urged us to ‘go and tilt the world on its axis’. His challenge echoed the call of St Ignatius centuries ago to ‘go forth and set the world on fire’. It is rooted in the reality of the now, bent always and positively toward the future.

Since taking up the role of the Jesuit Refugee Service (JRS) Country Director at the start of April, I can already appreciate how much can change here, just in one week. This is the world’s newest country and still a fragile State. Its people have lived with insecurity and the constant threat of it for years. In just a few short months, I’ve glimpsed the profound reality and impact of that.

JRS had a very important presence in Sudan during years of conflict. Now, since South Sudan gained independence in 2011 and formed a new State, new frontiers of our work have opened up. We have a large presence in Maban County, since 2013, close to the northern border with Sudan and Ethiopia. Here, the host community, internally displaced people and refugees from Sudan live in what is often an uneasy co-existence. Through one bridge-building initiative led by the Irish Jesuit, Tony O’Riordan SJ, JRS has bought together a group of young people from these three different communities to live and learn together in a full-time teacher training programme. This is the only initiative of its kind in Maban, and it is a unique response to the invitation to ‘tilt the world on its axis’ by taking a risk to promote engagement in a location where people co-exist but live apart. JRS works in Maban alongside others in the midst of a barren landscape, accessible only by aircraft, where a box of oranges transported with other supplies for the project is welcomed like manna from heaven by the team!

At the other end of the country close to the border with Uganda and the Democratic Republic of Congo, JRS Yambio is working to support a network of Diocesan and Community schools. In this context, the internally displaced live amongst the host community and returnees (those who were once displaced and recently returned).

One of our staff there told me that though there is huge potential for peace and prosperity in this fertile region of South Sudan, because of past experiences, people here are always ready to run. JRS helps create stability and opportunity in a different way in this location and spends a lot of time advocating for the protection of people living in a nearby camp for internally displaced persons who are under-supported.

As a faith-based organisation, no matter what we do into the future, hope must always be at the centre of our messaging and way of being. In South Sudan, JRS aims to nurture this hope primarily through supporting access to quality education. When people have an opportunity to learn, socialise and self-actualise in a safe, friendly environment, their sense of themselves, their sense of the world and their place in it blossoms. The future looks different, creativity flourishes, many things become possible. Education is transformative, and transformed people go on to transform their societies and the future of their nation. It is as simple as that! So this continues to be the aim of JRS into the future.

We cannot do everything and it would be harmful to try. Our aim will be to grow responsibly, to balance the focus on the quantity of people reached with the quality of the support. The core values of JRS – solidarity, compassion, hospitality, integrity and justice will be at the centre of our efforts. Child safeguarding will continue to be a key area of focus across all our work. In the months ahead JRS South Sudan operations will be strengthened by a new financial management system and increased attention to human resourcing and staff wellbeing.

We will also critically review our work in light of the Universal Apostolic Preferences and think about how we live, how we work and how we relate to the people we serve. We must in the years ahead continue to reflect on our ways of working and living amongst those in need and ensure we never become detached from those we serve, or inadvertently leave them behind as we run ahead! It calls for a patience and a pace of work that is in many ways counter-cultural for those of us who were raised in the ‘western world’.

In an environment where funding is increasingly volatile coupled with pressure to meet short deadlines and high targets, there is always the risk of being swept along and led by agendas and ways of working that belong to others, and not to JRS. It will take careful collective discernment and courage at times to find and keep on the right path.

There is so much to look forward to on the road ahead. Later in the year, we hope to work with the Eastern Africa Province of Jesuits to organise a first gathering of all Jesuits working in South Sudan. These will include those working with JRS Maban, those at the Secondary School in Wau, at the Parish and Vocational Training Centre in Rumbek, the Teacher Training College in Cueibet and the Farm initiative in Akol Jal. This is what the way ahead looks like. Sincere thanks for your prayers and support now and into the future.