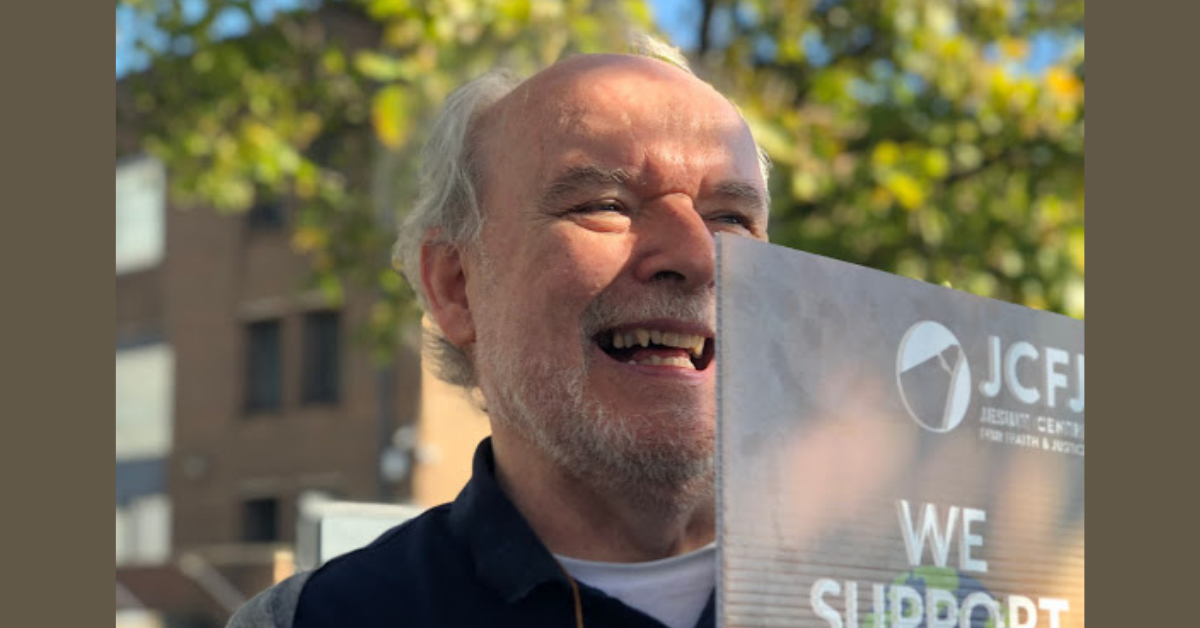 A personal profile of our Director, John Guiney SJ, by Ruadhán Jones in The Irish Catholic last week reveals what inspired him to join the Jesuits and how walking with the most marginalised people in our world changed his life.

In the 1970s, the then Superior General of the Jesuit’s – Fr Pedro Arrupe, called by some the second founder of the Jesuits – had what Fr John Guiney SJ calls “a tremendous insight”: in order for the Jesuits to promote and preach the Faith, they must also promote justice. It was this insight or charism which drew Fr Guiney, now head of Irish Jesuits International, to the order in the first place and then convinced him to stay.

His desire that Jesuits follow a strong option for the poor led Fr Guiney to a life as a missionary in East Africa, first Tanzania in 1979 and later Kenya

“I think after the 70s we (the Jesuits) took a very strong orientation of working with the poor,” Fr Guiney tells The Irish Catholic. “Fr Arrupe’s vision inspired me not only to join the Jesuits, but to remain. He really had a vision of Heaven not being something we wait for when we die, we must start creating it here on Earth, especially for the poorest and those who were suffering.

“His inspiration carried me as a missionary to Africa. I’m a farmer’s son from West Limerick and at the end of secondary school I was about to go and do agricultural science in University College Dublin. And I had this, I suppose what I’d call a conversion retreat, at the end of my sixth year at school, led by a Jesuit. He introduced me to Jesus in some way that turned my life upside down and I joined the Jesuits.”

But, as Fr Guiney says, it was one thing getting in the door – staying was another, and that couldn’t have happened without the inspiration of Fr Arrupe. His desire that Jesuits follow a strong option for the poor led Fr Guiney to a life as a missionary in East Africa, first Tanzania in 1979 and later Kenya.

“At the beginning I went to Tanzania in East Africa,” Fr Guiney explains. “The people who inspired me and graced my life there were people who suffered from HIV. I worked a lot with people who were HIV positive in our parish. You know at that time I used  to marry people in January, young men and young women, and I would bury some of them in December.

“HIV devasted Africa in the 70s, 80s and 90s. Walking with young people who were living and dying with HIV changed my life and graced my life in Tanzania and later in Kenya. People who were HIV positive were very much people who found themselves on the Cross of Christ. At that time there was no cure, you know. Once you got HIV, people really felt they were dying and many of them did. I remember some of them when they got the news were suicidal and some committed suicide. So that was a very humbling experience and I think walking with them graced my life and changed my life.”

The real insight of the liberation theologians, which was a very strong theology of the 70s and 80s in Latin America, was that walking with the poor evangelises

From there, Fr Guiney headed further East into Kenya, where he worked in a slum parish in the capital city, Nairobi. He came into contact with thousands of refugees from the Rwandan genocide, a sobering experience and one which made an impression on him. However, it was in his next position as director of Jesuit Refugee Service Eastern Africa that his life was truly shaped.

“But I was losing faith. You asked me if ever I had problems with my faith, I really had problems with faith in God when I listened to the stories of man’s inhumanity to man, when I saw the damage that was reaped on poor people, especially women and children in war situations. In listening to I suppose the people who suffered most, they were ready to forgive. They gave me hope that we can move beyond conflict, we can move beyond war, we can in fact – even in the darkness – find light, in hopelessness we find hope.

The real insight of the liberation theologians, which was a very strong theology of the 70s and 80s in Latin America, was that walking with the poor evangelises. I experienced that kind of evangelisation through the poor, through my work with those who were HIV positive, through refugees. They brought me to God like the man brought to God on the stretcher

In 2007, Fr Guiney returned to Ireland to become director of what was then Jesuit Missions and is now Irish Jesuit International, where he continues his ministry to the poor.

“Our work in the Irish Jesuits International is an outreach to refugees all over the world,” Fr Guiney says. “Through funding and especially through mission funding, supporting educational projects in Syria, in Lebanon, Northern Nigeria now where you have a real conflict, in South Sudan especially. Children have only one chance at education. It’s so important to get children into schools when they have been displaced by the war.

“We as Irish Jesuits International, we really recognise that the health and wellbeing of children and of women is key in communities. That walking with the excluded, which is now a priority, was reinforced by the recent meeting of the Jesuit congregation in 2018. They recognised one of our preferences of work was walking with the excluded… There’s a lovely saying, I think it’s an Indian saying; ‘If we cannot find God in our lives, we are not looking down enough.’”

With thanks to Ruadhán Jones and The Irish Catholic