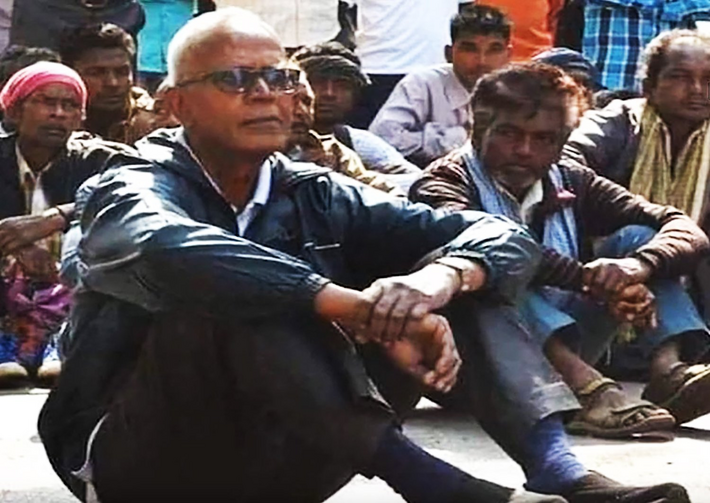 The death of 84-year-old Jesuit Stan Swamy SJ in hospital, while awaiting bail from an Indian prison, has caused shockwaves throughout the world. Falsely accused of being linked to terrorist groups, he had in fact spent the last four decades advocating for the rights of indigenous peoples (Adivasi and Dalit) in the States of Jharkhand, Chattisgarh and Madhya Pradesh.

Stan Swamy SJ was Director of the Indian Social Institute Bengaluru, from 1974 to 1991. From 1991 to 2000, he served as Director of the Jharkhandi Organization for Human Rights, a Jesuit Social Centre in Chaibasa which works among the ‘Ho’ tribes. In 2000, he moved to Ranchi and in 2006, he founded a new Social Centre, Bagaicha, which works for the rights of Adivasi people in central India through research studies, documentation, training and establishing solidarity with tribal movements

In 2016, he undertook a major research study about the Undertrials in Jharkhand, entitled “Deprived of rights over natural resources, impoverished Adivasis get prison”.  With the creation of Jharkhand State in 2000, there was displacement and land alienation because of mining, factories, townships and dams in which the people who owned the land were not consulted.

Fr Swamy engaged young activists to resort to the country rulings or laws that empowered the indigenous people in issues regarding their lands and territories. Based on his study, he also founded the Persecuted Prisoners Solidarity Committee (PPSC) which documented, studied and published the fabricated cases filed against thousands of Adivasis languishing in jails. They were all accused of links with Maoists, although they had opposed mainly the land grabbing by mining companies and other corporates. Based on the findings, he filed a Public Interest Litigation in the Ranchi High Court demanding speedy disposal of the cases. Ironically, Fr Swamy was arrested on 8th October 2020 on the basis of being linked to Maoist terrorist groups – the same false accusation as those he was advocating for.

In India freedom of expression is guaranteed selectively. Any form of dissent is repressed through unlawful restrictions on peaceful protests and by silencing critics. Human rights defenders, including students, academics, journalists and artists, are arbitrarily arrested, often without charge or trial.

Despite a Supreme Court ruling to reduce prison overcrowding to curb the spread of Covid-19, the authorities continue to incarcerate many who are critical of the ruling Bharatiya Janata Party (BJP) government. The authorities fail to adequately investigate or punish perpetrators of violence based on caste, sex and gender, and carry out reprisals against those who report rape and caste-based crimes. There is widespread impunity and lack of accountability for murders and attacks carried out by vigilante mobs and police officers against religious minorities. Swift and extreme restrictions are placed on freedom of movement in response to the pandemic, leaving thousands of migrant workers stranded without adequate food and protection.

Individuals attending peaceful protests against the Citizenship Amendment Act (CAA) and or the protests by more than 300,000 farmers since September 2020 have faced arbitrary arrests and detention. Over 5,000 people have been arrested under the Unlawful Activities Prevention Act (UAPA) between 2016 and 2019. Supporters of the ruling BJP regime have been known to attack Christians or Muslims, Dalits or Adivasis, yet human rights defenders, journalists or anyone who raises questions against the policies of the government is labelled anti-national, Naxalite or Maoist and detained under charges of sedition without bail or trial.

In July and August 2020, Fr Swamy SJ was harassed, and interrogated multiple times for over 15 hours by the National Investigation Agency (NIA) about an event in Elgar Parishad which preceded violence between Dalits and Marathas at Bhima Koregaon near Pune on 31st December 2017. In October 2020, the NIA arrested Fr Swamy, falsely accusing him of having personal links with the banned Maoist extremist group, the Communist Party of India (CPI). He was the sixteenth and the oldest of the human rights defenders arrested in connection with the Bhima Koregaon case, who became widely known as the BK16. He, and the other 15 human rights defenders, were arrested under the draconian Unlawful Activities Prevention Act (UAPA) Law.

Fr Swamy’s lawyers sought bail on for him on health grounds. As an octogenarian with advanced Parkinson’s disease he was already frail when arrested. His medical plea stated that he had almost lost his hearing ability in both ears, had fallen in jail multiple times, was operated on for hernias twice and suffers pain in his lower abdomen. The NIA court rejected this bail plea.

In November 2020, his lawyer again filed an application before the special court seeking that he should be allowed to use a straw, a sipper cup (as he could not hold a glass due to the Parkinson’s disease) and be provided with winter clothes. The court directed the medical officer of the jail to respond to this and ordered the matter to be heard on 4th December 2020.  At that time, the National Platform for the Rights of the Disabled (NPRD) said the withholding of these items was a “denial of the same constitutes a violation of his basic rights.” The prosecution sought 20 days to file a reply to this application.

On 22nd March 2021 Fr Swamy’s bail plea was rejected. On 26th April 2021 – his 84th birthday – appeals were filed with Bombay High Court against two orders of the National Investigation Agency (NIA) Court, the first rejecting his emergency bail application on health grounds in October 2020, and the second rejecting his bail plea on merits.

In the second week of May, Fr Swamy’s family members sought his release on the grounds that he had contracted Covid-19 and was unable to even speak to his lawyers.  While hearing his bail plea on health grounds on 21st May through a video linkup, the Bombay High Court judge witnessed Fr Swamy’s failing health and offered him treatment in a government or private hospital. He refused the offer at the time, saying all he wanted was bail to go back to his home.  He stated that when he arrived at the prison, his bodily systems “were very functional”, but in the months in prison, “there has been a steady, slow regression” of his health.

Although reluctant to leave his fellow prisoners, Fr Swamy – who had Covid-19 symptoms – was persuaded by his family and friends of the need to go to hospital, and he was admitted to Holy Family Hospital on 28th May. His condition worsened over the following weeks and on 5th of July he suffered a cardiac arrest and died shortly afterwards.

The Jesuit Conference of South Asia (JCSA) said “the Bombay High Court was hearing some petitions, seeking bail and a constitutional challenge to a section of UAPA, on the 5th July when his lawyer announced Stan Swamy’s death. “

Solidarity with the BK16

Despite Fr Swamy’s passing, Irish Jesuits International stands in solidarity with the remaining 15 human rights defenders who were arrested with him. During his months in prison, Fr Swamy was deeply concerned with the release of these people, so they could resume their important work, and the international Jesuit community will continue to advocate for the release of this group.

Fr Swamy knew that what had happened to him was not something unique or had happened to him alone.  “It’s a broader process that is taking place over the country”  he said, noting that “prominent intellectuals, lawyers, writers, poets, activists and student leaders are all put into jail just because they have expressed dissent”.  In a video released before he was arrested he said “I am happy to be part of this process because I am not a silent spectator”.

Irish Jesuits International would like to thank our many supporters and partners as we joined the international “Stand with Stan” campaign for his release. Many letters were submitted to TDs in Ireland who brought the case to the attention of the Minister for Foreign Affairs to encourage further advocacy for justice. Fr Swamy’s campaign for justice was featured in the national and international media, for which we are very grateful.