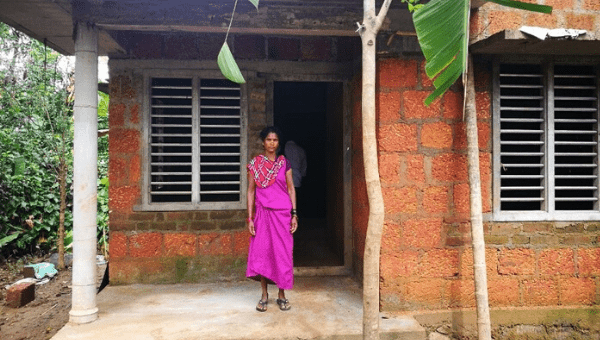 August 2018 saw the Indian state of Kerala endure the worst flooding since 1924. Almost 500 people were killed. Homes, schools and businesses were destroyed leaving many people with no shelter and no livelihood.

Irish Jesuit Missions and the other members of the Xavier Network contributed more than €100,000 to the Keralan relief effort. The money went towards helping communities affected by the floods rebuild their homes and to providing them with household essentials. It also contributed to the recontruction of kindergartens and to the support of education programmes in the area. A year later, in August 2019, Kerala was once again struck by severe floods, something that delayed and hindered the recovery process.

Bindu (photo above) belongs to one of the indigenous tribes of northern Kerala who have been historically marginalised and remain economically extremely vulnerable. Income from the Xavier Network floods helped her with the reconstruction of a house which was destroyed by the floods of 2018. It was one of several households that the funding supported.

After receiving funding, Bindu’s house construction project was stalled for several months because of a second incidence of severe flooding in August 2019. Her house is in a remote part of hilly northern Kerala, where due to damaged roads it was very difficult for trucks to deliver construction materials and building supplies. The limited budget which Bindu received to construct her house, affected the quality of builders and contractors she could hire and the urgency with which they worked to rebuild her home. However, with the help of local Jesuit partners in Kerala, she has been able to put pressure on the contractors and to expedite the process. Xavier Network funding supported the repairing and rebuilding of several schools. However the newly-painted building received fresh damage due to the intense flooding that occurred again in 2019. Water marks up to the height of the door is visible on the walls. Replenished books are drying outside, after the damage caused by the second flood. The repeated flooding has unearthed some bigger questions about where future efforts around flooding should best be targeted, as climate breakdown makes extreme weather events a regular occurence. The Xavier Network has also contributed funding for school fees, books and other necessary items for children who were severely affected by the flooding. Many people lost their livelihoods during the floods. Chandran has very little sight in his eyes. His wife also has disabilities and they relied heavily on a makeshift shop they built adjoining their house, which was their only source of income. During the first flood the structure of the shop was so weak that most of it was washed away leaving him without any way to sell his goods. Through support from the Xavier Network, Chandran received funding in several instalments into his bank account, to reconstruct his shop using more robust material and to replenish old stocks that were destroyed. Even after the second round of flooding, the strengthened structure of the shop held firm and Chandran was able to safely store some of his goods on higher ground in it, saving them from the water.

As Keralans recover from what has been an extremely difficult period, there is hope and courage in the knowledge that the most vulnerable people are not forgotten. The Xavier Network will remain working in partnership with the Jesuits in Kerala in responding to the needs of the most marginalised sections of society as they adjust to life in the aftermath of the floods. The challenge of building resilience to future occurrences of flooding is a major one, as the likelihood of flooding in the region increases.