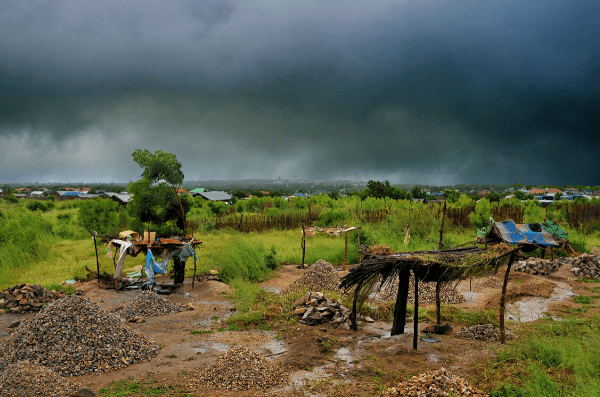 Noelle Fitzpatrick visited the Irish Jesuit Missions office recently to discuss her work as Country Director with the Jesuit Refugee Service (JRS) in South Sudan and update us about the recovery from 2019’s devastating floods.

JRS is celebrating its 40th anniversary this year, and she reflected on the impact that the organisation has had on people’s lives in that time. Recently, she had an appointment with the head of corporate affairs in a bank in Juba, South Sudan’s capital. He was prompted by the mention of JRS to tell her a story about how the organisation had touched his life as a child, when he lived with his family in Kakuma Refugee Camp in Kenya. JRS had supported to finish his education, something which would have been otherwise impossible. Of the other children who received support, he knows of one who have gone on to work for the United Nations and another who emigrated to Canada.

Stories like this reflect the intergenerational impact that JRS has had, with the help of its donors, in the past four decades. Noelle says these stories are common, that she has met many people in South Sudan who benefitted from the organisation’s help when they were younger. For the fortieth anniversary, she wants to share their stories, and to thank people who have donated over the years and reassure them that their generosity really has made a positive difference to someone’s life.

Last year, South Sudan and parts of East Africa had the worst flooding in decades. Rains had been heavy in recent years, but they came earlier this year, as weather patterns are affected by the changing climate. There were two serious floods, the worst being last October when heavy rains and water flowing down from the Ethiopian highlands resulted in the northern town of Maban being submerged under two metres of water overnight.

The impact of the floods was devastating. Maban is a remote and harsh place, where options are limited for people, making them extremely vulnerable to the effects of the floods. In addition to its permanent residents, many of whom are returned refugees, it is home to four immense refugee camps which hold more than 150,000 people. The camps were cut off from the main roads by the flooding, leaving inhabitants without food and emergency supplies until aid could get access to them.

The host community were also badly affected by the flooding. While people in the refugee camps are dependent on aid agencies to distribute food to them, those outside the camps are self-reliant. They depend on cultivating their own patches of land to grow crops, keeping animals and shopping for food in the local market.

The floods killed many of the livestock owned by the community, including black pigs, goats, chickens and ducks, which affected the community’s resilience by wiping out important sources of food and income. The cost of food in the marketplace soared, due to limited supply, making it unaffordable to most people. The JRS compound and teaching centre were badly damaged and some staff were evacuated for their safety at the time. The team got the programme of work back in operation quickly afterwards and have worked hard to ensure people could attend classes as soon as possible.

Noelle visited Maban about six weeks after the October floods. Some roads have been repaired, while damage is still apparent on others and debris from the destruction is visible. She recalls that big pools of water remained on the land, despite the intense heat from the sun, indicating just how bad the situation had been at the time.

Although the severity of last year’s floods was unprecedented, JRS and the communities in Maban need to be equipped for it to happen again. The organisation is cognisant of the impact that climate change and is working with local people to see what can be done in preparedness. They are planning remedial work on the schools and considering raising classrooms on a plinth to offer some protection and mitigate against the impact of future flooding. JRS is also conscious of its own carbon footprint and is moving towards making small but significant changes including using only recycled paper, and away from plastics. Noelle feels it is important for international organisations like JRS to lead the charge in developing people’s conscience around environmental awareness and climate change.

The political situation in South Sudan is still tense. The civil conflict which has been ongoing for many years, with intermittent periods of peace, has taken a psychological toll on people. There is currently hope that the tension will come to an end and that a unity government will be formed, and the next six months could see huge change in the country. Noelle reflects that it would be preferable that the timelines for talks be extended and that progress is slow if it results in lasting and enduring peace. She hopes for that.