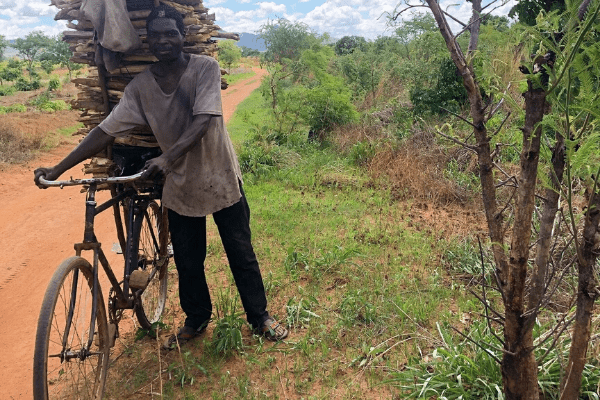 “We want our dreams to be so big they scare us”, says Adrian Makasa Chikwamo SJ, a Zambian Jesuit who is Director of the Jesuit Centre of Ecology and Development in Malawi. He is talking about the challenge this small centre faces tackling both poverty in Malawi and the effects of climate breakdown. However, his optimism and enthusiasm is shared by the whole team. JCED’s head office is in Lilongwe but the real action takes place about two hours’ drive away, in the Kasungu region, which is where the field work happens. The centre’s four field officers are based here, working with 30 groups from local villages on protecting the natural environment and adapting to the impact of climate change. Each field officer is a social community development worker who specialises in a different aspect of the project.

The team holds meetings regularly with the Farmers’ Field School groups, which are made up of 15-25 men and women. I attended one of these mobilisation and planning meetings with the JCED team, in a village outside Kasungu. It was a typical December day in Malawi, the temperature was over 30 degrees and I was grateful that the meeting took place under a straw-covered canopy that gave some protection from the sun. It was interesting for me to observe how the JCED team and the members of the farmers group interacted. The team has a high level of expertise and each member holds academic qualifications, in natural resources management, agroforesty or a related subject, but they talk and listen to the farmers as equals, addressing their concerns and valuing the intimate knowledge of the land and years of farming experience that the group has. The genuine mutual respect is palpable, and the mood of the meeting is jovial despite the serious issues under discussion.

Tione Matthews Phwandaphwanda leads the team, in its mission of teaching ‘climate-smart agriculture’; natural methods of planting, mulching and making organic manure that keep nutrients in the soil and help it to retain water. Irrigation is a real challenge for farmers in this sub-tropical climate, and there are many requests for more boreholes in the villages.

Rapid population growth in Malawi (from 3.8 million people in 1960 to almost 19 million today) has led to an increased need for agricultural land and added to the pressure on its forests. Poverty and a lack of alternative income-generating opportunities mean many people in rural Malawi have little choice but to harvest forest resources for food, firewood, medicine and building materials.

Team member Nameka Katumbi oversees the centre’s reforestation programme. Trees provide shade from the sun and shed leaves, which helps to keep moisture in the ground. The practice of ploughing a field to rid it of shrubs and trees before creating drills to plant in is discouraged for the benefit these natural plants provide to the soil. As part of its reforestation programme, JCED grows tree seedlings in a nursery in Lilongwe and on a farm in Kasungu to distribute to the groups who are encouraged to plant them around their homesteads to provide shade and bear fruit which can be eaten.

The consequence of Malawi’s dependence on wood is the loss of 3% its forests every year which, if it continues, will leave the country without trees by 2079. This lack of forests and the overuse of agricultural land has stripped the soil of its nutrients and made the country especially vulnerable to the extreme weather events that happen with increasing frequency now, such as 2018’s floods. JCED’s Martha Phiri promotes use of the ceramic cooking stoves among the farmer groups, which dramatically reduce the amount of firewood needed to use them (see Martha’s article here).

In order to become resilient to the impact of a changing climate on agriculture, the groups are helped to develop alternative sources of income, to allow them to buy food and essentials when needed. JCED’s Martin Chikumba works with the farmers on savings and loan schemes set up within each group that function like credit unions by offering small loans to members. I saw the scheme at work in a local village, where we arrived on the day where the dividends were shared among the group. It was humbling to witness the happiness on the face of a woman who had received the equivalent of seven Euro, who planned to go to town to buy rice for her family.

Many of the sights in Malawi caused me to reflect on the excess and waste that characterises our way of living in Ireland and witnessing how climate change is impacting on people’s lives there brought home the reality of it. What the JCED team is doing is important. They may dream big, but their knowledge and hard work match up to their dreams. It’s time for us to play our part too, by campaigning for our government to be serious about taking action on climate change, which is affecting vulnerable people who did not cause it.