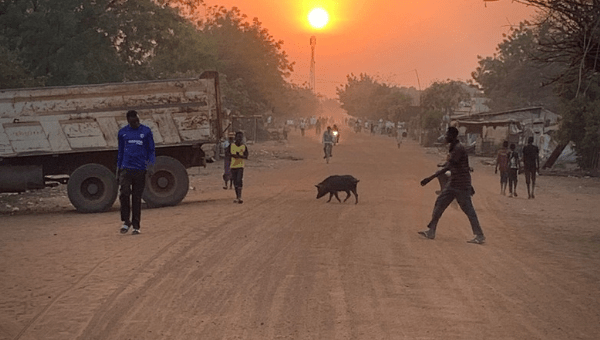 Seasonal flooding in August was worse than usual, which caused the initial crisis. It was followed by a more severe series of floods in October which not only intensified the humanitarian emergency but led to the evacuation of staff from many NGOs in Maban.

Following an appeal from Tony O’Riordan SJ, the Irish Jesuit who was then Director of the Maban programme, Irish Jesuit Missions obtained a Misean Cara grant to support post-flooding recovery and reconstruction efforts. The funding targeted 1,000 households out of 12,982 people within the host, internally displaced persons (IDP) and refugee communities in the region. As the grant was being implemented, in the month of October, the region experienced additional and unprecedented scales of flooding. The government declared a state of emergency in flood affected regions, within which Maban was the worst affected. The floods led to large-scale displacement and intensified humanitarian need for 200,000 people from the host, IDP and refugee communities.

With water levels rising higher that a metre all NGOs in Maban, including JRS, suffered severe flood damage to their office compounds, warehouses and staff housing facilities. During the acute phase of the emergency in October, there was widescale evacuation of humanitarian staff. Because of the diminished capacity of the JRS compound to safely host the team, nine staff members were relocated to Juba [capital of South Sudan] and 10 others to the UNHCR compound in Maban. A core recovery team, led by Tony O’Riordan SJ, who could be quickly evacuated in case of additional floods, remained in the compound, and worked tirelessly to mitigate the damage.

Irish Jesuit Missions launched an emergency appeal for funding at this time, to which our supporters generously donated €15,684, enabling a core team of staff, community volunteers and local staff to maintain critical humanitarian support through the flood emergency. Other members of the Xavier Network also donated to the crisis fund. As a result of this emergency funding, JRS was the first organisation to successfully restore the full scale of their humanitarian programme. The team collaborated with a number of other NGOs to provide core relief items and food stocks for the most vulnerable and at-risk individuals in the host and refugee communities.

JRS helped people to cope with the catastrophic effects of the flooding in a number of ways. One example of the assistance provided to the people of Maban is the complimentary feeding programme which ran in primary schools for several months. Ensuring that children got one nutritious meal every day encouraged families who had incurred significant losses in the floods to keep sending their children to school. Particularly for girls in this context, limited access to basic needs in their families can increase the risk of being withdrawn from school to support household income, or being forced into early marriage to relieve immediate financial pressures.

Vulnerable groups within the communities, including the elderly and people living with disability would continued to receive psychosocial care throughout the flooding crisis and receive basic supplies and supports to help to mitigate the risks the floods exposed them to.
Emergency sanitation was provided for temporary school locations in Maban: JRS supported Good Shepherd ECD and the St Mark’s Primary School with the construction of three stands latrine blocks each with a handwashing facility. The schools how have separate latrines for boys, girls and teachers. Temporary learning spaces and storage facilities were built and reinforced with basic flood defenses to minimise future water damage to them.

Thanks to the aid received from Misean Cara and the generosity of our donors, JRS has been able to help people in Maban recover from this disaster. We are very grateful to all of you who responded to our appeal in October 2019.