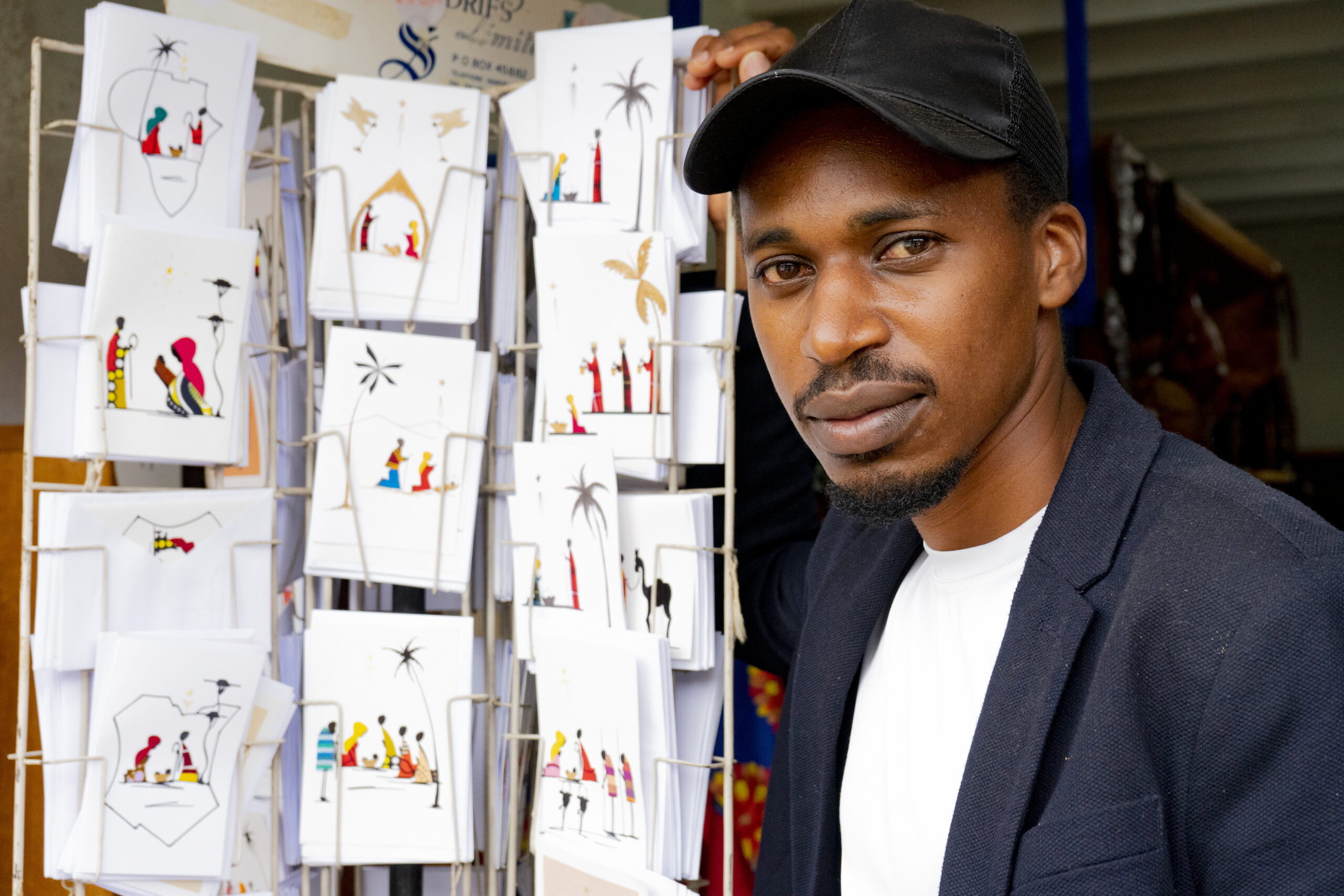 Wycliff’s family fled Rwanda in 1995, when he was only four years old. With his parents, three sisters and brother, he ran through the woods of Akagera National Park under cover of darkness to escape.

Now the 29-year-old makes beautiful greeting cards for Mikono Refugee Craft Shop in Nairobi. 20 years after his arrival in Kenya, Wycliff has started his own family – he has a beautiful four-year-old boy, and is happy to have a space to make a living from his art.

After the most violent years of the genocide ceased, Wycliff and his family, of mixed ethnicity – both Hutus and Tutsi – were being pressured and harassed by both parties and obliged to take a side. When his grandmother was killed as a consequence of this, the family made the harsh decision to flee the country.

They first reached Muzungura Refugee Camp, in Tanzania. On the way, his youngest sister got pneumonia and due to a lack of proper medical treatment at the camp, she died soon after arrival.

At the camp the family faced the same issues that prompted their escape when they encountered Rwandans and were forced to leave. However, their problems followed them to the next refugee camp as discrimination against Rwandans and by their own countrymen continued. In the early 2000s, the family had had enough of camps and moved to Nairobi, Kenya, where they have remained ever since.

Mikono Refugee Craft Shop in Nairobi was started in 1993 to enable refugees to make a living from their hand-crafted products. Since then, refugee artisans from all over the region have been offered space and resources to showcase and sell their wares. The shop started at the Jesuit Refugee Service (JRS) compound, where people passing could buy things ranging from peanut butter to wood-carvings and patchwork aprons.

Wycliff’s mother was the first to find out about JRS, which was already very well known among the urban refugee community in Nairobi. She started supplying cards to the shop and taught all her children her handicraft. Wycliff was particularly talented and soon started to produce cards to supply the shop. Now he is one of Mikono’s most stable suppliers. The 29-year-old makes beautiful greeting cards for the shop, and even supplied Irish Jesuits International with their Christmas cards last year.

Due to the Covid-19 pandemic the shop had to close its doors in early 2020. However, this prompted the opening of website – its virtual window – in July, available to customers in the US, Canada, and Europe. Thanks to the new international demand, Mikono’s artisans are growing steadily in numbers and revenue.

The shop works with the vendors to meet quality standards, and to agree on designs that are loyal to their traditional techniques. It is part of the fight against fast fashion, by promoting sustainable consumption and production practices. Every purchase at Mikono contributes to the livelihoods of over 350 people.

Since he arrived in Kenya, Wycliff has been blending in among Kenyans, learning local languages and making local friends, hoping not to be pointed out as a Rwandan to avoid facing grievances ever again. 20 years after his arrival in Nairobi, he has started his own family – he has a beautiful four-year-old boy, and is happy to have a space to make a living from his art.