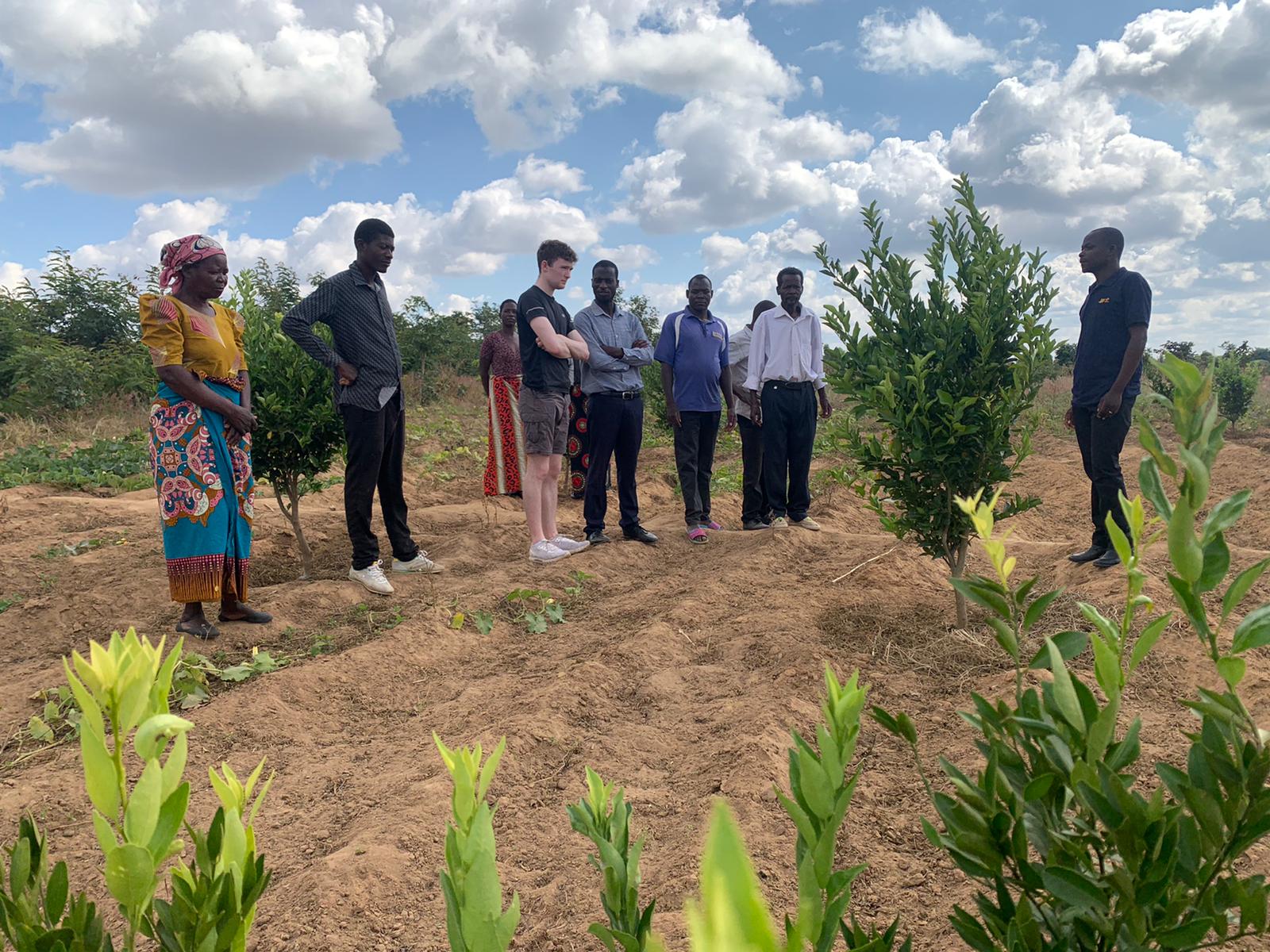 Last week we were welcomed into a rural farming community that JCED assists. Before JCED’s involvement they weren’t knowledgeable on the practice of sustainable agriculture. For instance, they had a limited variety of fruit trees which were slower to produce fruit and they were using chemical fertiliser which is both expensive and harmful to the soil in the long term. A 50kg bag of fertiliser can cost as much as $50.

Since JCED’s involvement, they have learned how to make their own natural fertiliser using animal manure, which is more readily available and cheaper. In addition, they have begun fruit tree nurseries with a wide variety of fruits growing. This gives them an additional source of income during the year when crop sales have ended. Not only do these trees diversify their revenue streams, but they also protect the soil from heavy rains and protect crops from the harsh sunlight. The implementation of trees into crop fields is known as agroforestry. This method is becoming increasingly popular across the world, as it improves food security and increases biodiversity.

Speaking with the community in Chimbalu 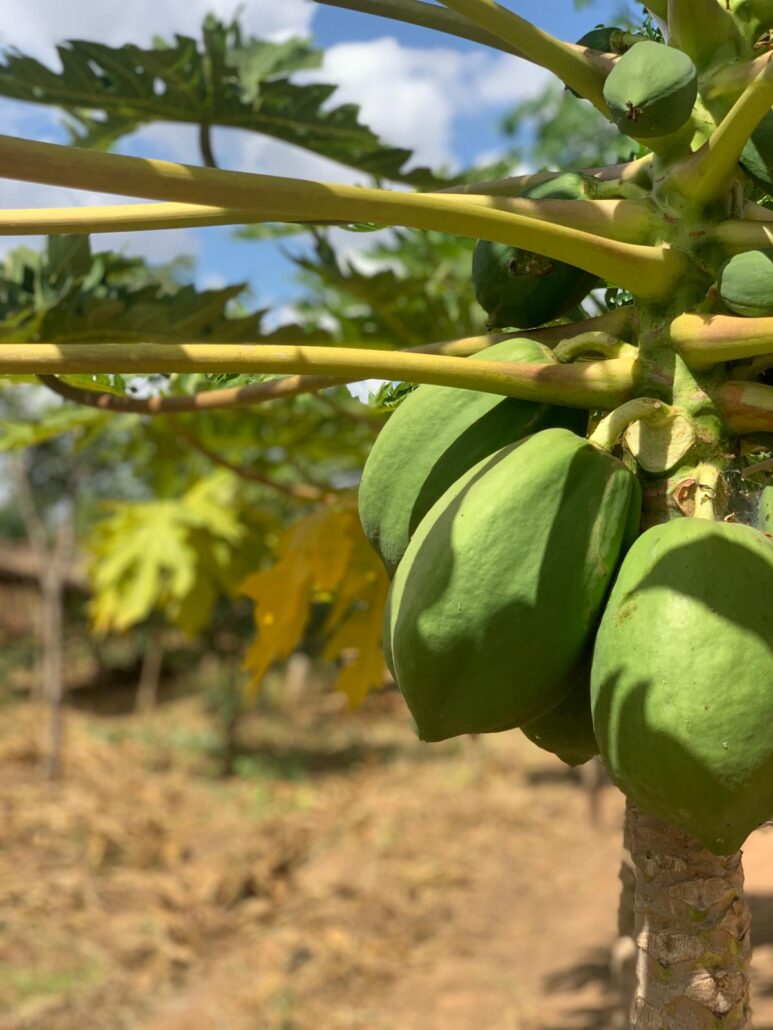 Due to the changing nature of our climate, the village faces severe issues with water availability. Rainfall is the first issue mentioned when chatting with the village Chief. They no longer receive adequate levels of rainfall and the rainy season begins later, giving them a shorter timeframe to grow crops. They are also experiencing more dry spells. This affects their crop production and dries out the natural fertilisers that they are using, rendering them less effective.

When looking at barriers that exist for them to adopt further sustainable practices, the Chief notes that negligence remains a problem. These sustainable practices require a lot of human energy and skill. They also lack the knowledge and sufficient level of resources to maintain their current practices.

A recent outbreak of a disease has affected some of their fruit trees. Unfortunately, they do not have the expertise to tackle the problem and the lack of water in the community restricts them from having large numbers of animals to produce enough manure. As a result this reduces the amount of natural fertiliser they can produce.

I also raised the question of when did they start noticing changes in climate patterns and if these changes have been gradual or sudden. The Chief replied:

“I noticed gradual changes for some time, but I started to notice drastic differences from 2018 onwards. These differences include the reduction in rainfall, more dry spells and the shortening of the rainy season”.

As well as this, the Chief explained that wild animals have disappeared completely. They have either died off or migrated to other areas. This is worrying as these animals play a vital role in the stability of the surrounding ecosystem.

When casting an eye to the future, the community is extremely worried about the availability of water. They are fearful that the reduction in rainfall may eventually lead to losing the rainy season completely. They also foresee that water may disappear completely from the region, as they witness groundwater tables fall.

In his final remarks, the Chief closes on an optimistic note saying that, “with the involvement of JCED we have begun to appreciate the value of trees and nature”. The Chief has also developed the passion to encourage other farmers to take care of the environment and he is at the forefront of spreading the village’s practices to surrounding communities. Despite all their progress, the Chief points out that the issue of water remains, and it stops them from making further progress. 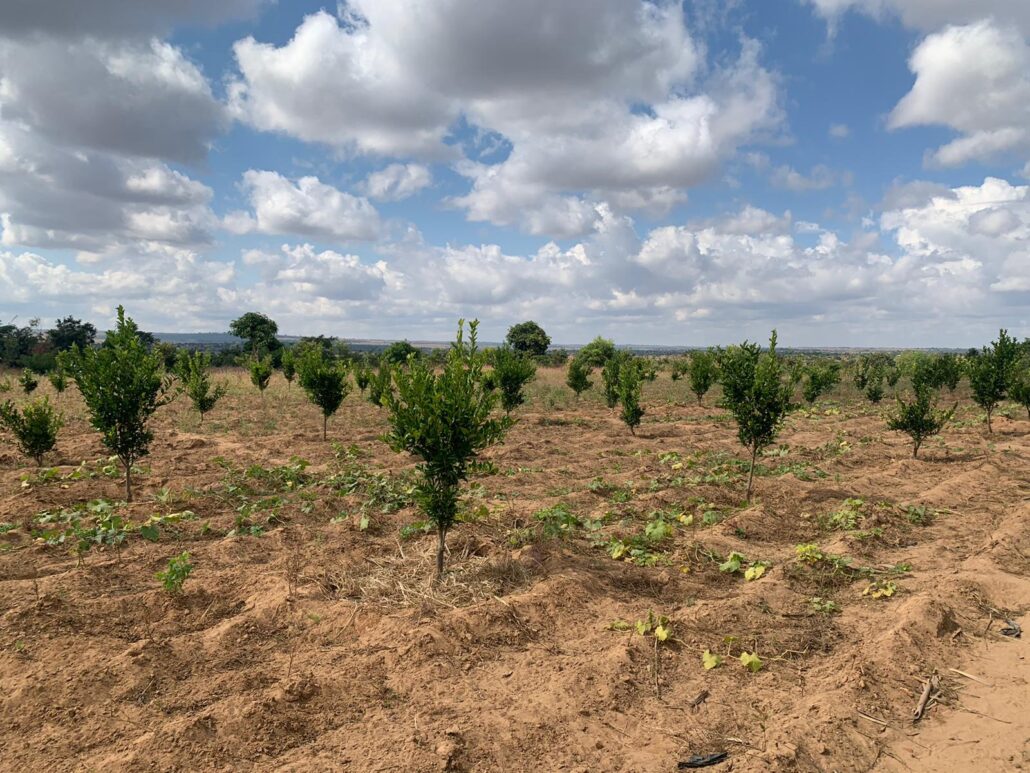 From my encounters with communities in person and engagements with communities across Africa during an Integral Ecosystem zoom event, the most pressing issue was that of water. The substance most important to life on earth is increasingly harder to obtain in traditional water safe areas.

Towns and villages that have developed thanks to water, have come up against a severe roadblock. This issue is intrinsically linked to climate change. Changing rain patterns and increased temperatures have shifted rainfall patterns.

In Malawi, the rainy season is shortening and the level of rainfall that arrives is too intense for people and land to use effectively. In the coming decades, water will be the defining issue. Water is the foundation for animal, plant and human life.

As they say in Malawi, ‘Madzi ndi moyo’ – water is life.

See how climate change is affecting other vulnerable communities: here

If like Sam you would like to volunteer at one of our projects – please get in touch: Communications@iji.ie

Our overseas work placements are development focused and are structured around need and requested skills from our project partners.