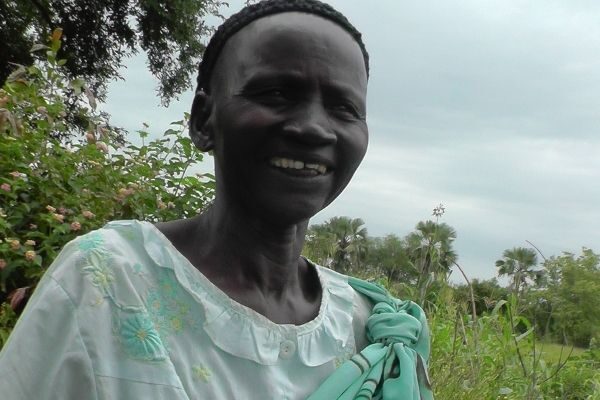 A long term donor of IJI has shared with us how the contrast between her life and the life of a woman in South Sudan has inspired her to donate to support women like her to thrive.

“Some years ago when I visited the Irish Jesuits International (then Irish Jesuit Missions) office in Gardiner Street to drop in my Christmas subscription, I spotted collection boxes with Mary Apet’s picture. Mary was being trained in sustainable agriculture by MAJIS in South Sudan. I took one of the boxes thinking this was a very handy way to save for such projects., and it had pride of place on a small table in my dining room. I undertook to save every €1 coin I received. Several years, and several boxes later, Mary has become very dear to me. I look at her picture and sometimes contrast our different lifestyles – her life is extremely difficult living in a constant war situation in South Sudan, while I am very lucky to live in relative peace in Ireland. I pray for Mary. I also realise how privileged I am that God is using me as just one of the instruments to help her and her family. I will probably never meet Mary in this life, but hopefully if I make it into the next life – what a joyful meeting we will have. She is on my ‘to meet’ list – along with St. Ignatius, to thank both of them for their attempts to keep me grounded.”

Mary Apet has indeed had a life that is very different to the life of an Irish woman. She and her family have depended heavily on farming to feed themselves ever since she can remember. While her father was away from home moving his cattle across the countryside looking for water and grass, her mother looked after the family, farming on a very small piece of land near their home. The food produced was not even enough for daily life. No surplus. Just survival.
The shortage of food at home forced her at eight years of age to live at the cattle camp with her father living on cows’ milk; often the only food for the day. There was no opportunity to go to school. When she was just a teenager, she was married to one of the cattle keepers who paid her dowry in cows to her father.

Before the outbreak of war in South Sudan more than 90 percent of the country’s 10 million people earned their living from agricultural produce on small family farms and from herding cattle. But violence forced families like Mary’s to abandon their land and flee to seek safety and shelter. She belongs to the Amonom clan and had to escape fighting between the Amonom and Panyon people. Now she lives with four of her five children in Akol Jal, near the Jesuit Multi-Educational and Agricultural Jesuit Institute of South Sudan (MAJIS), in Rumbek. It is comparatively peaceful there and she cultivates the land with others, growing vegetables and fruit

At MAJIS Jesuit Farm in Akol Jal people like Mary from the local population take courses to learn about sustainable agriculture with a special focus on vegetable production, beekeeping, poultry production, animal husbandry and agroforestry.

Hundreds of people, the majority of them women, have graduated from the courses, but face the challenge of inadequate water and safe plots of land to apply the agricultural knowledge and skills they have learned. MAJIS offers some of the graduates plots of land within the boundaries of the farm, where they have access to water, as well as the guidance and support of the the programme officers.

The women can bring their children with them to the farm to play, and when they are old enough they can attend an informal school with the children of other women farmers.

MAJIS has been a lifeline for women like Mary, who have been driven from their homes by war and left without any source of income. Thanks to the support of Misean Cara and personal donors like the author of the quote above, women like Mary have learned the skills they needed to look after their families and live a life of dignity.